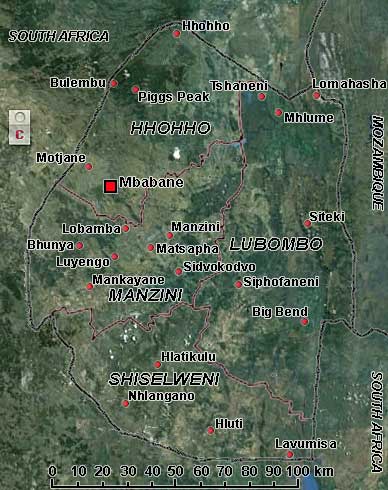 A short history of Eswatini

The Kingdom of Eswatini (Swaziland) is one of the smallest countries in Africa, and one of the most interesting: the last traditional absolute African monarchy, but at the same time one of the most progressive, with a diversified economy; despite its small size, offering greatly different landscapes because of its three markedly different regions. The mountainous "Highveld", or high grassland, in the west, with an average height of about 1200 metres above sea level; the "Middleveld", averaging 600 metres with good soil and rainfall; further east the "Lowveld", with its bush vegetation averaging about 300 metres in elevation and, rising towards the border with Mozambique, the Lebombo mountain range. It is said that Eswatini has all landscapes in Africa, except deserts and a coastline.

The majority of the people are the emaSwati or Swazi, belonging to the Nguni group of Bantu peoples and speaking siSwati, a language closely related to that of the Zulu, who live across the border to the south. Apart from those who live in Eswatini's few modern towns, most people still follow a traditional way of life. In the countryside men still wear the traditional "emahiya", a large piece of fabric tied with a knot at the right shoulder and under the left arm, and a loincloth on top of which is worn "emajobo", a skin loin covering; women may wear "sidvwaba", traditional skirts, and also brightly coloured fabrics on top, but usually tied with a knot on the left shoulder. Customary law is still strong; polygamy is common but only for those who can afford it: "lobolo", a bride price, must be paid to the bride's family. The yearly "uMhlanga" (Reed Dance) and "iNcwala" (First Fruits Ceremony) are extremely important and reaffirm the bond of the Swazi with their King.

The Swazi people are descended from a group of Bantu migrants, originally from east central Africa who crossed the Limpopo river and settled in the south of Mozambique, in the late fifteenth century. At first they consisted essentially of a number of small clans who had joined together under the leadership of a man called Dlamini; today, Dlamini is the Royal clan name and the most common surname in the country. Under the leadership of their chief Ngwane they settled in the region of the Pongolo river merging with Nguni and Sotho clans there. They crossed into the area of present-day Eswatini around 1750 and settled near Hluti, in the south under King Ngwane III; "kaNgwane" is also a name many Swazis use for their country. In the 1840s, they were led by King Mswati I, and his name became the name of his people (emaSwati; "Swazi" is actually the Zulu pronunciation). They were in constant conflict with the numerically stronger Zulu people to their south and, realising he could not defeat them, King Mswati sought protection from the British. Although initially refused, the British government signed a convention recognising Swazi independence in 1881.

White settlers came into the country and land and mineral rights concessions were made over the heads of the Swazis in 1890. Under an agreement signed in 1894 by Britain and South Africa, the Swazi were handed over to Paul Kruger's South African Republic (Transvaal), against their wishes. After the Anglo-Boer War of 1899-1902, the British government placed Eswatini under its direct jurisdiction as a Protectorate in 1903. The Swazi king, who was then called Paramount Chief, and his council were permitted to exercise authority over Africans only. In 1907, it became a High Commission Territory in which Britain governed Eswatini through a resident commissioner, who in turn was responsible to the British High Commissioner in South Africa. Only in 1964 the Swazi elected a legislative council and in 1967 a new constitution gave Swaziland internal self-rule, recognised King Sobhuza II as its king, and provided for a Parliament composed of a House of Assembly and a Senate. On 6 September 1968 the country achieved its independence as the Kingdom of Swaziland, with King Sobhuza II as head of state.

Swaziland was established as a Parliamentary democracy but there were soon problems, reconciling the traditional power of the King and the chiefs with that of a western system and an opposition party that was viewed by many traditionalists as obstructive and disrespectful. In 1973 the opposition was banned, a State of Emergency declared and King Sobhuza II ruled as in the old days, through the "libandla", the Council of Chiefs. He was, however, universally respected and loved as could be seen in the many ceremonies in which he participated. The "Oldest and longest reigning monarch in the world" died on 21 August 1982 and, after a power struggle within the royal family, was succeeded by one of his youngest sons, Prince Makhosetive (the name means "King of Nations"). He took the title of Mswati III and, at 18 years of age, became the world's youngest monarch on 25 April 1986.

Although the State of Emergency has been lifted and a new constitution was put into effect in 2005, there are criticisms about the present state of affairs in the country; King Mswati III, in contrast with his revered father, lives lavishly with a fleet of expensive cars and millions are spent on luxury mansions for his wives, now apparently numbering 15; he has reportedly already fathered 23 children. In this last respect he may try to emulate his father who was reported to have had at least 70 wives and 210 children. But times have changed: there was dismay when he chose another wife during the annual "uMhlanga" Reed Dance as the girl chosen had to give up any career she might have planned and there was widespread criticism by women when, in 2001, a five year "uMcwasho" period was proclaimed in which girls had to abstain from any contact with men; many ignored the ban and it was lifted a year earlier than originally announced. It was, however, an attempt to curb the highest HIV-AIDS rate in the world: almost 30% of Swazis between 15 and 19 years of age and 42% of pregnant women are HIV positive. As a result Eswatini now has the world's lowest life expectancy: about 33 years.

On 18 April 2018 King Mswati III, during a celebration marking the 50th anniversary of Swaziland's independence (and his own 50th birthday, a day later: the actual date of independence is 6 September) announced he was changing the country's English language name to its native "eSwatini"; as it is unusual in other languages to have a capital letter inside a word, it is usually written as "Eswatini". Whatever the name, the country is still beautiful and its people delightful. The photos on these pages show, however, the way it was between 1970 and 1975. His Majesty King Sobhuza II reigned as the "Ngwenyama", "Lion", with his mother the "Ndlovukati" ("She-Elephant"); after the death of his real mother that role was filled by one of his senior wives. This was before anybody had ever heard of HIV and AIDS; South Africa was still under the Apartheid regime and Mozambique a Portuguese colony. Swaziland was a beacon of freedom and racial harmony in Africa, a country of around 450,000 people (now over a million), no television, only two bitumen roads, (between the South African border via Mbabane to Mpaka, 25 kilometres east of Manzini and from Mhlambanyatsi via Bhunya and Luyengo to the main road) and one traffic light in the whole country, in Mbabane. It was a wonderful place with wonderful people.