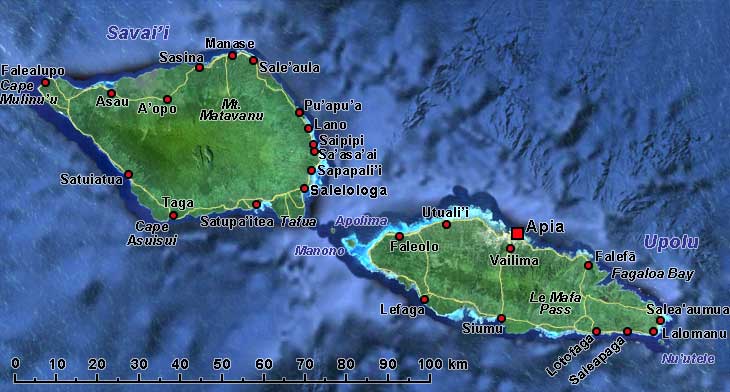 A short history of Samoa

Samoa, formerly Western Samoa, is an independent country consisting of the western part of the Samoan islands group. Its main islands are 'Upolu, with the capital Apia, and Savai'i, one of the largest islands in the Pacific. Between these are the small inhabited islands of Manono and Apolima. A few small uninhabited islands just off Upolu's east coast complete the nation, with a total land area of 2,831 km² and a population of around 195,000. "Fa'a Samoa", the traditional Samoan way, remains very strong, despite centuries of European influence. Samoan cultural customs such as the Samoa 'ava ceremony are important, solemn rituals performed at important occasions including the bestowal of "matai" chiefly titles. Items of great cultural value include the finely woven 'ie toga, or "fine mats". Although English is understood by all, Samoan remains the language spoken by all in everyday life. It is a wonderfully friendly country, with stunning Pacific scenery, but vulnerable to natural disasters: Hurricane Ofa in February 1990 was the worst cyclone in Samoa since the Apia cyclone of 1889; in 1991 Cyclone Val devastated the country and an earthquake on 29 September 2009 caused a tsunami causing huge damage and loss of life, especially in south 'Upolu. Cyclone Evan in December 2012 caused widespread damage in Apia.

It is generally accepted the Polynesian ancestors of present-day Samoans arrived here around 3,000 years ago, probably from south east Asia and Melanesia; pottery of a type known as "Lapita" dates from this time. Archaeological records and oral traditions and genealogies point to inter-island travel and intermarriage with Fijians and Tongans over millennia. The first European known to have sighted the Samoan islands was the Dutch explorer Jacob Roggeveen, in 1722. In 1768 the French explorer Louis-Antoine de Bougainville arrived and named the islands "Navigator Islands", being impressed with the navigating skills of the locals in their canoes. In 1830 John Williams, of the London Missionary Society arrived in Sapapali'i, a village on the east coast of Savai'i and started mission work here. This had great success; the first tama 'aiga chief to accept Christianity was Malietoa Vai'inupo, who was baptised "Tavita" (David). Currently 98% of the population identify themselves as Christian, with almost all dominations present.

In the 1800s missionaries and traders came to Samoa and in the latter part of the 19th century the foreigners, principally British, German and American, made land claims and played Samoan clans out against each other. The Samoans were not united, but belonged to different traditional groups associated with chiefly titles. The Germans were showing commercial interest on 'Upolu, establishing copra and cocoa bean plantations whereas the Americans were forming alliances on the eastern islands of Tutuila and Manu'a (now American Samoa). The British also sent troops to protect their business interests. Although there was traditionally no overall leader of the Samoans, the British Consul had proclaimed Malietoa (one of the chiefly titles) Laupepa "King" in 1878 and he was appointed "King of Samoa" on 7 February 1876 by the Consuls of the German Empire, the United States and the United Kingdom. However, this was not accepted by the chiefly Atua and A'ana factions who set up their own government with Tupua Tamasese as King. The Germans favoured Tamasese and banished Laupepa and his chiefs from his office in Apia after he had petitioned Queen Victoria for protection. The tension led to the First Samoan Civil War in which Samoans fought among themselves but with German intervention to assist Tamasese.

Malietoa Laupepa was exiled by Tamasese's German allies in 1887, but a rival faction headed by popular Samoan chief, Matā'afa Iosefo, gained ground; although his villages were shelled by the Germans, Matā'afa's warriors destroyed an invading German contingent and plundered their plantations. As now settlers and their property were targets on both sides, the foreign consuls sent for naval reinforcements and in March 1889 seven warships were anchored off Apia. Their involvement was cut short by a hurricane which sent six of the ships, three Americans and three German, to the bottom of the sea with a loss of 155 foreign lives; only the British one escaped. Matā'afa obtained the title of Malietoa in 1888 and was installed as king by his people; however, Germany would not accept this as he had defeated its supporters and the British and Americans considered Tamasese a German puppet. Britain, Germany and the United States then signed the General Act of Berlin on 14 June 1889, declaring Laupepa king once again and bringing him back from exile. Although initially Laupepa acknowledged Matā'afa's right to the title and office, he was persuaded by the other chiefs to reclaim the kingship, allotted by the foreign powers. On 4 December a "Fono" (traditional council) was held and his supporting chiefs declared him King of Samoa once again. This caused a split between the Malietoa factions, leading to a war which resulted in the deportation of Matā'afa to Jaluit in the German administered Marshall Islands.

The Second Samoan Civil War about succession to the kingship had broken out in 1898 upon the death of Malietoa Laupepa, when 19 year old Malietoa Tanumafili was declared King of Samoa by Great Britain and the U.S.A. During the Siege of Apia in March 1899, Samoan forces loyal to Malietoa Tanumafili were besieged by a larger force of Samoan rebels loyal to Matā'afa Iosefo, who also had been declared King. Supporting Tanumafili were landing parties from four British and American warships and over the course of several days of fighting, the Samoan rebels were defeated; American and British warships even shelled Apia on 15 March 1899. As the situation became untenable, with foreign political influences deeply ingrained in the Samoan struggle for leadership, a joint commission of Germany, the United States and Great Britain (the "Tripartite Convention") in June 1899 abolished the Samoan kingship, allocated German control over the western islands (presently independent Samoa) while the United States was given the eastern islands (presently American Samoa). To compensate the British, the German relinquished rights in Tonga and certain areas in the Solomon Islands and West Africa. The agreement was signed in Washington on 7 November 1899, without any Samoan consent; they were not even aware their islands were being split.

Matā'afa Iosefo was named Ali'i Sili ("Paramount Chief") of Samoa while the German Kaiser was declared Tupu Sili ("Paramount King") of Samoa. The young Tanumafili – no longer King of Samoa – then left for the British Fijian islands to further his university education. On 1 March 1900 the flag of the German Empire was hoisted in Mulinu'u, the administrative area on the peninsula in the west of Apia and Dr. Wilhelm Solf was sent to govern German Samoa. He at first seemed to support the traditional political system that had been disregarded by the previous European consuls. Relations between Matā'afa Iosefo and the German Imperial officers seem to have been generally good, although many Samoan customs were suppressed under German rule, such as ceremonial 'ie toga (fine mats) exchanges and kilikiti (Samoan cricket) matches. And by 1912 the German administration, preparing for war in Europe, now maintained only a semblance of local participation in government, dominating it in colonial fashion. They abolished the office of Tupu (King) and Ali'i Sili ("Paramount Chief", similar to a governor): Matā'afa Iosefo had been reduced to "Fautua" (advisor). He died on 6 February 1912 and Malietoa Tanumafili, who had meanwhile returned to Samoa, regained support as "Fautua" and the sole holder of the Malietoa title.

At the outbreak of the First World War New Zealand troops under Lieutenant-Colonel Logan invaded Samoa on 29 August 1914, on behest of the United Kingdom; the Germans surrendered without a fight. New Zealand began reorganising Samoa's government, assuring the people that the new government would be for Samoa's benefit. Malietoa Tanumafili and Tupua Tamasese Lealofi II were appointed as joint "Fautua", a system that continued until 1963, in fact a dual monarchy of two traditional chiefs. Local chiefs were now also free "to make rules in the best interests of the village" and village "Fono" (traditional council) retook administrative powers lost under the Germans. But relations soured when an influenza epidemic killed a fifth of Samoa's population during 1918–1919 after a New Zealand ship was allowed to berth in Apia in breach of quarantine. At the time, Samoa had a population of some 38,000 Samoans and 1,500 Europeans. On 17 December 1920 the League of Nations granted British-New Zealand mandate over western Samoa.

During the twenties, opposition to New Zealand rule grew among the leaders of some of the four Samoan royal families (the "tama'āiga") who supported an independence movement known as the Mau, that had grown out of discontent with Governor George Richardson's policies (1923-1928) and growing distrust of foreign intervention in Samoan affairs. It was nonviolent, but opposed by some Samoans, especially those allied to the Malietoa families and villages. On 28 December 1929, during a peaceful demonstration in Apia, New Zealand police tried to arrest one of its leaders; in the struggle that followed, officers began to fire randomly into the crowd, during which High Chief Tupua Tamasese Lealofi III and ten others were killed and 50 injured - an event that became known as "Black Saturday". In December 1946 Western Samoa became a United Nations Trust Territory and, with the agreement of the United Kingdom, it was again placed under the jurisdiction of New Zealand, charged with promoting "the political, economic, social and educational advancement of the inhabitants and their progressive development towards self-government or independence".

After repeated efforts by the Samoan people, Western Samoa finally gained independence in 1962; it was the first small-island country in the Pacific to become independent. Its 1960 constitution, which formally came into force upon independence, is based on the British pattern of parliamentary democracy, modified to take account of Samoan customs. There are more than 25,000 matais (chiefs) in the country and only matai title holders can be elected by Samoans to the parliament. Western Samoa joined the Commonwealth of Nations on 28 August 1970 and in July 1997 the government amended the constitution to change the country's name from "Western Samoa" to simply "Samoa". On 7 September 2009 Samoa changed from driving on the right to the left hand side of the road, bringing it in line with other countries in its neighbourhood, including New Zealand, with which it has strong ties: a large population of Samoans live there. And at the end of December 2011 Samoa omitted 30 December from its calendar, moving to the west of the International Date Line, again in common with New Zealand and Samoa's neighbours, except American Samoa: the previous timezone dated from 4 July 1892, to work in line with American traders based in California. The Independent State of Samoa is now truly its own master.