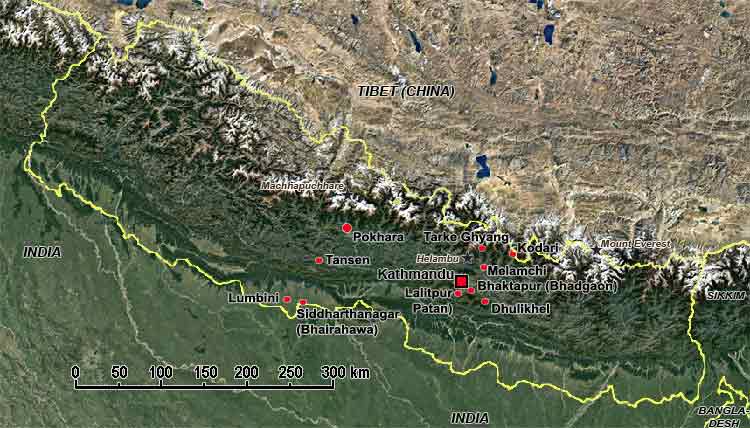 A short history of Nepal

Nepal is a landlocked country in South Asia, with India to the west, south, and east and Tibet, ruled by China, to the north. The small state of Sikkim, on its eastern border, used to be independent too but became part of India in 1975. The northern boundary follows the approximate crest of the Himalayas and includes Mount Everest, the highest point on Earth. This region of mountains, hills and valleys cover about 80 per cent of Nepal. The Tarai (or Terai), a flat, fertile river plain along Nepal’s border with India, covers the rest of the country. The total land area is 147,181 km² and the population is around 28 million.

The name Nepal goes back to the fourth century BCE when the Hindu faith was founded on the Indian subcontinent. In these regions small kingdoms arose; one of those was that of the Shakya clan. A Shakya prince, Siddharta Gautama, probably born in the sixth century BCE in Lumbini, south Nepal, became the future Buddha. In the north, the culture was more related to that in Tibet. Various kingdoms, some from northern India, ruled over what is now Nepal. The Newar people are thought to have lived in the Kathmandu Valley since the fourth century CE, developing a Hindu-Buddhist culture. In the early 12th century, there arose a kingdom under rulers with names that had the Sanskrit suffix malla, meaning “wrestler”. For about two centuries they ruled over the country, but then their kingdom splintered into many petty states. In the late 14th century, however, another Malla dynasty arose in the Kathmandu valley, and much of central Nepal came under a unified rule. In 1482, it was divided into three kingdoms: Kathmandu, Patan (now Lalitpur), and Bhadgaon (Bhaktapur) and in the subsequent years, these splendid cities acquired their palaces and temples.

Rajput warriors from India later established a Gurkha principality. Their king, Prithivi Narayan Shah, set out to conquer Nepal. He first secured the neutrality of the neighbouring mountain kingdoms in Nepal. In 1769 he captured the Kathmandu Valley after several bloody battles and sieges, notably the Battle of Kirtipur in 1767. Prithivi Narayan Shah became the first king of a unified Nepal. The Gurkha kingdom extended its influence to territories beyond its border. Still, a dispute with Tibet led to a Chinese intervention and the Sino-Nepali war of 1788-1789 in which Nepal had to pay reparations to China. The East India Company now ran northern India, and Gurkha incursions into north India led to the Anglo-Nepali War (1815–1816). The Nepalese were accustomed to fighting in the mountains, and the British Army suffered heavy losses, but finally, the Gurkhas were defeated. A peace treaty was signed, and Nepal became a protectorate of the British government of India in 1816. The British military highly regarded the Gurkhas and a Brigade of Gurkhas continues to serve in the British Army to the present day.

The Shah dynasty had established the Kingdom of Nepal, but instability caused by factionalism within the royal family culminated into violence in which hundreds of princes and chieftains were executed. In what became known as the Kot massacre Jung Bahadur Kunwar, with his brothers, killed about 40 members of the Nepalese palace court including the Prime Minister which led to the king losing power and the establishment an autocracy of hereditary prime ministers. In 1850 he installed his candidates to be king on the throne, insuring that all major decisions were to be made by him as prime minister. In 1858 King Surendra bestowed upon him the honorific title of Rana, an old title denoting martial glory used by Rajput princes in northern India. Now named Jung Bahadur Rana, he became the founder of the house of the Ranas: the later prime ministers descended from his family and added his name to their own in honour of his accomplishments.

The Rana autocracy was marked by tyranny, but they were pro-British and even helped militarily to sustain British control in India during the Indian rebellion in 1857; as a reward, the British gave some parts in the Terai region to Nepal. Gurkha troops were highly regarded by the British and fought with them in the two World Wars. However, in the late 1940s, discontent with the autocracy grew. When China invaded Tibet in the 1950s, newly independent India sought to assert more influence in Nepal to counter a possible military threat from Communist China. It sponsored King Tribhuvan and a new government, mainly by members of the social-democratic Nepali Congress Party, bringing to an end the hegemony of the Rana prime ministers and the policy that had kept Nepal isolated and closed to the outside world. King Tribhuvan died in 1955 and was succeeded by his son, King Mahendra, who, after years of power struggles between the king and the government, in 1960 dismissed the cabinet, imprisoned the prime minister and imposed direct rule in a “Panchayat” system of guided democracy.

King Mahendra died in 1972 and was succeeded by his eldest son Birendra Bir Bikram Shah who, after a series of strikes and pro-democracy riots in 1990 agreed to lift the ban on political parties and Nepal to become a constitutional monarchy. Highly regarded, King Birendra was described as one of the few Nepalese monarchs who wanted the Nepalese people to experience real democracy. However, in 1996, clashes between Maoist rebels and government forces led to a civil war, launched by the Communist Party of Nepal (Maoist) with the stated purpose of overthrowing the Nepalese monarchy and establishing a People’s Republic. It resulted in deaths of over 17,000 people and only ended with a peace accord in 2006. Five years earlier, on 1 June 2001, a massacre had taken place at a dinner party in a house on the grounds of the Narayanhiti Royal Palace, the residence of the Nepalese monarchy. Crown Prince Dipendra opened fire, killing eleven members of the royal family: his father, King Birendra, his mother, Queen Aishwarya, and seven others, including his younger brother and sister. He then shot himself in the head. His motive and the circumstances of the tragedy are still a subject of speculation.

Because Dipendra was Crown Prince, he was proclaimed king while in a coma, but he died on 4 June 2001, three days later. Prince Gyanendra, the second son of Mahendra, who had not been present during the massacre, had been named regent and was now proclaimed king. Gyanendra had been briefly King of Nepal at the age of four in 1950-1951 when his grandfather Tribhuvan went in exile during the struggle to remove the Rana oligarchy. He now sought full control of the government, but, in response to a democracy movement in 2006, he agreed to relinquish sovereign power. On 18 May 2006, the reinstated House of Representatives voted to limit the king’s powers and declare Nepal a secular state, ending its official status as a Hindu Kingdom. On 27 December 2007, the monarchy was abolished altogether, and Nepal declared a republic. The first President of Nepal was Dr Ram Baran Yadav. On 20 September 2015 Nepal became a federal democratic republic divided into seven unnamed provinces. In elections in 2017, the Nepal Communist Party emerged as the ruling party with a substantial majority at the federal level, as well as in six provinces.

On 25 April 2015 Nepal was struck by a powerful earthquake with a magnitude of 7.8, followed by a 7.3 magnitude aftershock two weeks later. It caused a combined death toll of 8,500, hundreds of thousands of people made homeless, entire villages flattened and terrible destructions in its iconic cities in the Kathmandu valley. These photos were taken in 1979 when the villages and cities were intact, all temples and palaces standing in all their glory. But, without a doubt, it will all be restored and rebuilt. Nepal will remain a fantastic place to visit, with its glorious scenery, marvellous cultural heritage and friendly, hospitable people. Jai Nepal!