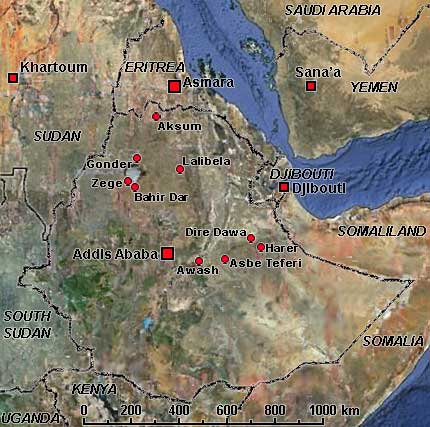 A short history of Ethiopia

Ethiopia is a fascinating country in eastern Africa, bordered by Eritrea to the north, Somalia and Djibouti to the east, Kenya to the south, Sudan and South Sudan to the west. Highlands above 1500 metres cover about 40% of Ethiopia’s land area and constitute almost half of Africa’s highland area; It has several high mountains, the highest being Ras Dashan at 4,620 metres. The Blue Nile, or Abay, rises in the northwest and flows in a wide semicircle before entering Sudan. Its chief reservoir, Lake Tana, lies in the northwest. Annually, more than 80% of the Nile River’s water comes from Ethiopia’s highlands, as does virtually all of the rich silt reaching Egypt’s Nile delta. The country has a land area of 1,100,000 km² and a total population of over 109 million.

Ethiopia was one of the earliest world centres of agricultural innovation. Archeologists have found the oldest known human ancestors in Ethiopia, including Ardipithecus ramidus kadabba (c. 5.8 - 5.2 million years old) and Australopithecus anamensis (c. 4.2 million years old). Unlike most African nations, it was never a European colony, and it has been essential to the modern history of Africa as a symbol of independence. Its capital, Addis Ababa, was the headquarters of the Organisation of African Unity (OAU). The African Union’s successor and the United Nations Economic Commission for Africa are also based here. The nation’s recent history has been marked by the fall of one of the world’s last emperors, a socialist revolution, a succession of devastating famines, and civil war between its central government and several regions. In 1993, Eritrea, a province of Ethiopia since 1962, seceded after a 30-year war with Ethiopia’s central government. Major famines occurred in 1972-74, 1984-85, 1987, and 1989-90, killing perhaps 2 million people. International donors, mainly from the West, provided millions of tons of food aid in each case.

Originally called Abyssinia, Ethiopia is sub-Saharan Africa’s oldest state. Its Solomonic dynasty claims descent from King Menelik I, traditionally believed to have been the son of the queen of Sheba and King Solomon. The current nation is a consolidation of smaller kingdoms that owed feudal allegiance to the Ethiopian emperor. To the ancient world, Ethiopia meant all lands south of Egypt. Ethiopia’s northern highlands were the site of the empire of Aksum (Axum; established in the 1st century CE), which controlled the Red Sea coast and had trade and cultural contacts with southern Arabia, Egypt, Rome, and Greece. In the 4th Century, Aksum’s Emperor Ezana was converted to Christianity, and Aksum then used its power to spread Christianity across the central highlands. Late in the 7th Century, Islam penetrated the region from the Red Sea coast and took hold in eastern Ethiopia.

Modern Ethiopia’s borders result from the late-19th-century expansion under Emperor Menelik II, who assumed the throne in 1889. He used alliances with European powers and imported firearms to unite his rivals behind him and conquer rich lands to the east, west, and south. In 1896 his armies defeated a modern Italian army at the Battle of Adowa (Adwa) to assure Ethiopia’s independence. Disorders that followed Menelik’s death brought his daughter to the throne in 1917, with his cousin, Tafari Makonnen, as regent and heir apparent. When the empress died in 1930, Tafari was crowned Emperor Haile Selassie I. Haile Selassie, called the “Lion of Judah”, outlawed slavery, created a constitution, began a modern army, educational system, and bureaucracy between 1916 and 1935, when Fascist Italy invaded and occupied Ethiopia. Haile Selassie resumed the throne in 1941 and remained in power until he was overthrown on 12 September 1974 by a military clique.

Mengistu Haile Mariam, a young military officer who founded the Ethiopian Communist party, came to power after a series of bloody purges in 1977. The ruling military clique (called the Derg or Dergue) converted itself to a civilian party in 1987, making Ethiopia a one-party Communist state under a new constitution. But the country was in turmoil: the regime battled Eritrean secessionists, Somali rebels, and its own people in a campaign called the “red terror”: thousands of political opponents were killed. When Mengistu’s most generous supporter, the Soviet Union, collapsed in 1991, he was overthrown. The Ethiopian People’s Revolutionary Democratic Front (EPRDF) seized the capital and established a Transitional Government. In May 1991, a separatist guerrilla organisation, the Eritrean People’s Liberation Front, took control of Eritrea. The two groups agreed that Eritrea would have an internationally supervised referendum on independence; this took place in April 1993 with almost unanimous support for Eritrean independence, which Ethiopia recognised.

In May 1995, multiparty elections took place, won by the EPRDF. The president of the transitional government, EPRDF leader Meles Zenawi, became the first Prime Minister of the Federal Democratic Republic of Ethiopia. In 1996 Ethiopia’s thirteen provinces, many derived from historical regions, were reorganised into nine (now ten) ten ethnically based and politically autonomous regional states and two chartered cities. However, border disputes between Ethiopia and Eritrea resulted in a vicious war in 1998-1999 that left more than 80,000 dead. There have been disputes and ethnic clashes between various ethnicities. In late 2020 military confrontations between the federal government and Tigray People’s Liberation Front forces caused thousands of refugees to flee to neighbouring Sudan. Multiethnic Ethiopia, which has a rich and proud history, nevertheless remains a troubled country. These photos are from 1973 when Haile Selassie, the the “Lion of Judah”, was still on his throne.