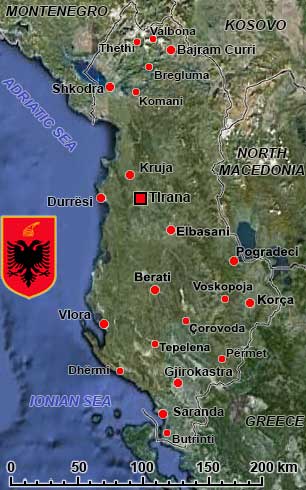 A short history of Albania

Albania, in the southwestern corner of the Balkan peninsula, was until recently probably the least known country in Europe. In virtual isolation from the end of the Second World War until the fall of its Stalinist Communist regime in 1990, it was a nation that was very difficult to visit. All that has changed, and Albania is now eager to join the world. It is a beautiful, mountainous country, about 28,750 km², with a coastline of 362 kilometres, fascinating towns and villages and a proud and hospitable people of about 3.6 million.

Albania is unique in that its people probably descended from the ancient Illyrians, and their language is a particular branch of the Indo-European family. “Albania” is the Medieval Latin name of the country, and its inhabitants used the name Arbër or Arbën in the middle ages. It came to be called “Shqipëria” by its inhabitants, which could be interpreted as “Land of the Eagles” (shqiponjë is Albanian for eagle). The double-headed eagle, probably derived from the arms of the Byzantine Empire, was the crest of the family of Skanderbeg, Albania’s National hero, and came to be its symbol. However, the word Shqiptar (Albanian) appeared only around 1555, in the oldest known documents written in Albanian, and only to designate the language spoken in the region still called Arbër.

The Illyrians were a strong force in the western Balkans from the Second Millenium BCE. Greeks established colonies in the 7th Century BCE to trade with the Illyrians, who formed a kingdom based at present-day Shkodra. The Roman Empire gradually conquered the Balkans, but this was generally a peaceful era, and Illyrian language and culture remained intact, although slowly Christianity took hold. In 395, the Roman Empire was divided, and the region became part of the Byzantine Empire. During the great migrations of the 5th and 6th centuries, the area was invaded by, among others, Slavic peoples. In 1344 the Albanian territory was annexed by the Slavic Serbian kingdom. In 1389 the Serbs were defeated by the Ottoman Turks, who were now poised to occupy the whole Balkan peninsula.

Under the leadership of Skanderbeg (Gjergj Kastrioti Skënderbeu), Albania’s legendary hero who held the Turks at bay from 1444 to 1468, the country enjoyed a brief period of independence. But after his death, it was overwhelmed by the might of the Ottomans. During more than 400 years of Turkish occupation, most of the population converted to Islam, as the Ottomans favoured Muslims. Christians had to relinquish a son, who needed to be converted to Islam and serve in the army, while Muslims were exempt. On 10 June 1878, the League of Prizren was founded in Prizren (now in Kosovo). It aimed to defend Albanian lands from annexation by Slavic countries in the Balkans and seek autonomy under the Ottoman Empire. Repressed by the Turks, there were further uprisings until finally, in 1912, a provisional government was proclaimed by Ismail Qemali in Vlora.

However, the Great Powers acceded to Serbian demands that Kosovo, about one-third of Albanian territory, was transferred to their control in 1913. Land in the north became part of Montenegro. Large areas became part of present-day North Macedonia in the east, and the Epirus region in the south was lost to Greece. A German prince, Wilhelm Von Wied, was installed as ruler of what remained, but his rule was short-lived, lasting less than six months. Then, during the First World War, various armies occupied the country, and it was only in 1920 that the Italians were forced to leave. A Congress in Lushnja proclaimed a new government, and on 17 July 1924, Fan Noli, an Orthodox priest, who had lived in the USA, became Prime Minister and Regent. Earlier that year, Ahmed Bey Zogu, a chieftain from the north who had served as Minister of the Interior and represented the conservatives, had been forced to flee the country. He came back with financial help from Yugoslavia and Britain in December the same year, and now Fan Noli had to flee. In 1925 a republic was proclaimed with Ahmed Zogu as President; three years he declared the country a monarchy with himself as King Zog I. Under his rule, Albania allied itself with Mussolini’s Italy, and in 1939 the country was invaded and annexed by Italy.

During the war, Italy’s resistance against fascist occupation and, later, Germany was led by communist partisans, commanded by Enver Hoxha. After the war, the Communists were firmly in power: in 1946, the People’s Republic of Albania was proclaimed. The country allied itself with Stalin’s USSR to safeguard against Tito’s Yugoslavia, which had hoped to incorporate Albania. In 1960 Albania, incensed at the USSR’s de-Stalinisation and heavy-handed demands for port facilities, broke with the Soviets and allied itself with China, still firmly under Maoist rule. It adopted many of the disastrous policies of China, with city workers transferred to the countryside, heavily polluting industries, collectivisation and a ban on any kind of religion. After Mao’s death, China sought better ties with the West, and Albania broke free and embarked on an isolationist “self-reliant” course, with the country almost completely closed off from the outside world. As an enduring symbol of the regime’s paranoia, around 700,000 small bunkers were built all over the country.

After Enver Hoxha’s death in April 1985, the regime started slowly to unravel; people stopped working on the collective farms and industry ground to a halt. On 20 February 1990, after more than 50 years of communist dictatorship, the people of Tirana tore down and demolished the giant gilded statue of Enver Hoxha on Skanderbeg Square. Albanians tried to emigrate en masse that same year. Finally, in March 1992, elections were held, and communist rule came to an end. A wild “free for all” capitalism replaced tight control of the last half-century, enabling smuggling stolen cars into the country (Mercedes-Benz became the most popular car!). Crisis after crisis followed, the government collapsed in 1997 due to the additional collapse of pyramid schemes and widespread corruption, which caused anarchy and rebellion throughout the country until peace was restored. Albania has now finally taken its place among European nations. Albania officially became a NATO member on 1 April 2009, and membership of the European Union is a possibility in the future.