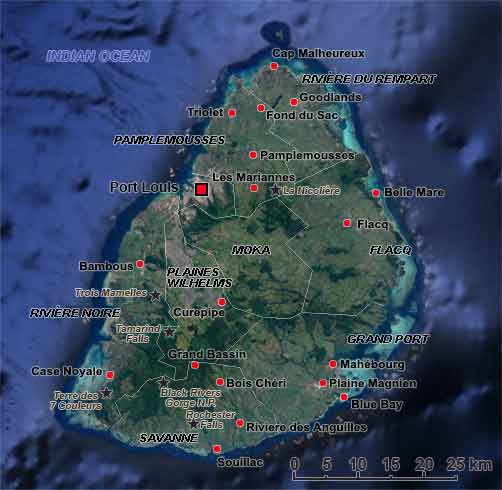 A short history of Mauritius

Mauritius, in the Indian Ocean, is an independent island republic, about 2,000 kilometres off the southeast coast of the African continent. It is a small island, with an area of 2,040 km² and a population of a little over one and a quarter million. The Republic of Mauritius also includes the islands of Rodrigues, Agalega and St. Brandon. Its capital and largest city is Port Louis, with a population of around 150,000.

The island of Mauritius was uninhabited before its first recorded visit around the year 975 by Arab sailors, who named it Dina Arobi. In 1507 Portuguese sailors visited it and a Portuguese sailor, Dom Pedro Mascarenhas, in 1512 gave the name Mascarenes to the group of islands consisting of Mauritius, Réunion, and Rodrigues. In 1598, a Dutch squadron under Admiral Wybrand van Warwyck landed at Grand Port and named the island Mauritius, in honour of Prince Maurits (Maurice) van Nassau, the stadholder of the Dutch Republic at the time. In 1638 the Dutch settled on the island, harvested the ebony trees, introduced sugar cane, deer and domestic animals. The dodo, a flightless bird, was hunted by the Dutch, killed by invasive species and its habitat destroyed: the last widely accepted sighting of a dodo was in 1662.

The first Dutch settlement lasted only twenty years. They made a few other attempts at settlement later, but these were not considered to be profitable, and they abandoned the island in 1710 for good. France at that time already controlled the nearby island of Réunion (then called Île Bourbon) and in 1715 took control of Mauritius, renaming it Île de France. The administration was handed to the French East India Company, and Europeans started to settle in 1721. By 1726, land grants had been made to colonists, and slaves were imported to work the plantations. Port Louis was developed to be the capital, port, and commercial centre. During the Napoleonic Wars, Mauritius became a base from which French corsairs organised successful raids on British commercial ships. This lasted until 1810 when a Royal Navy expedition was sent to capture the island. In a battle at Grand Port, the French prevailed, but the British managed soon after to land at Cape Malheureux on the north coast. The French surrendered the island to the British on 3 December 1810.

France officially ceded Mauritius including all its dependencies to the United Kingdom on 30 May 1814 through the Treaty of Paris, in which the British returned Réunion to France. The British administration led to rapid social and economic changes; in 1828 the colour bar was officially abolished and slavery in 1835. Large numbers of indentured labourers were brought in from India to work in the sugar cane fields, and the British also brought in many Indian soldiers. As a result, the majority of Mauritius’ population today is of Indian descent. The British colony of Mauritius consisted of the main island of Mauritius along with Rodrigues, Agalega, St Brandon, Tromelin and the Chagos Archipelago, while the Seychelles became a separate colony in 1906. In 1965, three years before Independence, the British Colonial Office split the Chagos Archipelago from Mauritian territory. Together with the islands of Aldabra, Farquhar, and Desroches from the Seychelles, these became the British Indian Ocean Territory. The British then forcibly expelled the archipelago’s local population and leased its largest island, Diego Garcia, to the United States as a military base. Since that time the sovereignty of the Chagos is disputed between Mauritius and the United Kingdom and its people still dream of going back to their stolen islands.

On 12 March 1968 independence was proclaimed, and Sir Seewoosagur Ramgoolam became the first prime minister with Queen Elizabeth II remaining head of state as Queen of Mauritius. Twenty-four years later, on 12 March 1992, Mauritius became a republic within the Commonwealth of Nations; the last governor-general, Sir Veerasamy Ringadoo, became the first president. The island’s government follows the Westminster parliamentary system, and Mauritius is highly regarded for democracy and economic and political freedom. The Human Development Index of Mauritius is one of the highest in Africa. Mauritius has the most competitive and one of the most developed economies in the African region, with manufacturing, financial services, tourism, and information and communications technology. The government provides free universal health care, free education up to tertiary level and free public transport for students, senior citizens, and the disabled. Along with the other Mascarene Islands, Mauritius is also known for its varied flora and fauna, with many species endemic to the island.