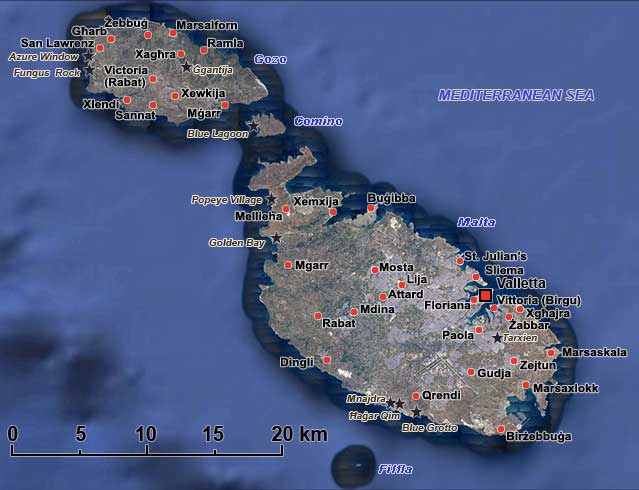 A short history of Malta

The Republic of Malta is a group of small islands in the Mediterranean Sea, 80 kilometres south of Sicily, Italy. Its total land area is 316 km² and, with a population of over half a million, it is one of the most densely populated countries in the world. Valletta, its capital, is the smallest national capital in the European Union. The Maltese language is unique in Europe: it is a Semitic language, descended from Siculo-Arabic, the Sicilian-Arabic language (now extinct) spoken in Sicily (831-1091), an Islamic kingdom that included Malta. The second official language is English, while Italian, an official language until 1934, is understood by most people; many modern words in the Maltese language are derived from Italian.

Settlers from Sicily arrived in Malta around 5900 BCE and developed a significant culture. Between 3600 and 3200 BCE, they had constructed Megalithiuc temple complexes in, among others, Mnajdra, Ħaġar Qim,and Ġgantija. A later development, around 3150 BCE, is the temple complex at Tarxien, one of the oldest freestanding structures on Earth. It seems that the island was depopulated around 2500 BCE, possibly due to famine or disease and the temple building culture disappeared. A new influx of immigrants arrived later, probably also from Sicily, as they built dolmens, smaller megalithic structures that are also found there. Sometime after 1000 BCE, Phoenician traders came on the island; they founded around the 8th century BCE a Bronze Age settlement in the area of Mdina and Rabat that developed into a city they called Maleth, a word that in Phoenician meant “port” or “haven”.

In 218 BCE, at the start of the Second Punic War, the Roman Republic established its rule over the island and integrated it into the Roman Province of Sicily. Maleth was renamed Melite or Melita, a word that could also be derived from the Greek word for honey; the ancient Greeks called the island Melite (Μελίτη), “honey-sweet” possibly because it was produced there. In 60 CE, the Apostle Paul was shipwrecked on Malta on his way to Rome, where he would be tried as a political rebel. In the 12th century, the St. Paul’s Cathedral was founded in Mdina, on the site where, according to tradition, Roman governor Publius met St. Paul. According to the Acts of the Apostles, Paul cured the Publius’ sick father, who, it is said, converted to Christianity and was made the first Bishop of Malta. Saint Paul reputedly lived for three months in a grotto in the Roman town of Melita. The Parish Church of St. Paul in Rabat was constructed over the cave in the 17th century.

By 535 CE, the Maltese islands had been incorporated into the Byzantine Province of Sicily and parts of the city of Melita was probably fortified to counter an increasing Muslim threat. In 870 CE, Melita was captured by the Aghlabids, an Arab dynasty that ruled parts of northern Africa and Southern Italy, nominally on behalf of the Abbasids. The Punic-Roman city was destroyed, its churches looted, and its inhabitants massacred: the island remained almost entirely uninhabited. Around 1048-1049, a Muslim community and their slaves from the Emirate of Sicily recolonised the island; Sicily was now nominally under the Fatimid Caliphate. They built a new settlement on the site of Melita, naming it Medina (“city” in Arabic); it remained Malta’s capital, Mdina in Maltese, until 1530. Their language, Siculo- or Sicilian Arabic, evolved into Maltese.

The Normans conquered Sicily twenty years earlier and attacked Malta in 1091, ending Muslim rule. Under Roger I, it became part of the Kingdom of Sicily, and the Catholic Church was reinstated. From 1194 to 1266, it was ruled by the Hohenstaufen dynasty and by 1249, the islands were entirely re-Christianised. After a brief rule by the French Capetian House of Anjou, it was ruled from 1282 to 1409 by the Spanish Crown of Aragon. In 1530 the Holy Roman Emperor, Charles V of Spain, gave the Maltese islands to the Order of Knights of the Hospital of St. John of Jerusalem in perpetual lease. These knights were a military and religious order and were driven from Rhodes’s island by the Ottoman Empire in 1522.

From 1530 to 1798, the Knights Hospitaller ruled Malta and Gozo. Malta became a substantial military base; the Order of Saint John’s fleet launched attacks against the Ottomans. In 1551 Barbary pirates, Muslim privateers, enslaved the 5000 inhabitants of Gozo and took them to the Barbary Coast, the Ottoman borderlands, on the north coast of Africa. In 1565, under Suleiman the Magnificent, the Ottomans attacked and besieged Malta, but the knights, led by the Grand Master of the Order, the Frenchman Jean Parisot de Valette, withstood them. The Great Siege of Malta ended in victory for the knights, eventually helped by Spanish forces. After this, the knights strengthened Malta’s fortifications and built a new city on the peninsula between Marsamxett and Grand Harbour: Valletta, named in honour of the Grand Master. The fortified city of Birgu received the Italian title Città Vittoriosa (Victorious City), the site of significant battles during the Great Siege of Malta.

In 1798 Napoleon Bonaparte captured Malta: the knight’s power had waned in the years before. On his way to Egypt, Napoleon asked for a safe harbour for his fleet and then turned his guns on his hosts. He enforced reforms, ending all feudal rights and privileges and abolishing slavery. He left a garrison of French troops, who ended up pillaging local churches; they were hostile to Catholicism, a result of the French Revolution. The Maltese rebelled, Great Britain and the Kingdoms of Naples and Sicily sent help and ammunition. Great Britain sent its navy, blockading the islands and negotiating the French surrender of Gozo on 28 October 1798. The British then transferred control of the island to the people who declared Ferdinand III of Sicily as their monarch. They set up a provisional government led by Saverio Cassar, who became governor-general.

The French garrison in Valletta surrendered in September 1800, and Malta became a British Protectorate; Cassar ruled Gozo until 20 August 1801, when he was removed, and Malta and Gozo were reunited. In 1814 Malta officially became part of the British Empire, and it became an important stop for trade between Britain and India after the opening of the Suez Canal. During the Second World War, Malta was heavily bombarded by German and Italian air forces. There was a British submarine base, and they launched attacks on the Italian navy. Malta became one of the most intensively bombed areas during the war. The Second Siege of Malta lasted from June 1940 to November 1942, and King George VI awarded the George Cross for the bravery of the Maltese people to the country as a whole. A depiction of this award was added to Malta’s flag and arms.

n 21 September 1964, the State of Malta obtained its independence, retaining Queen Elizabeth II as head of state. In 1971 the Labour Party under Dom Mintoff won government and declared Malta a republic within the Commonwealth on 13 December 1974. In 1989, American President George H.W. Bush and Soviet leader Mikhail Gorbacheva held a summit in Malta: the country had adopted a policy of neutrality in 1980. On 16 April 2003, Malta became a member of the European Union and adopted the Euro as its currency on 1 January 2008. It is a friendly and prosperous country but dependent on foreign trade. In such a small country, it has plenty of attractions for the tourist.

Back to menu at Top of the Page