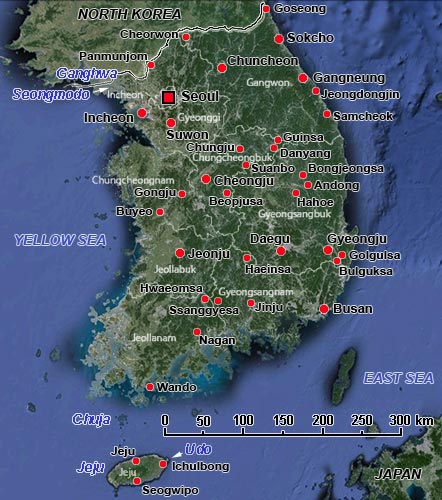 A short history of Korea

The peninsula of Korea, since 1945 divided into two separate and mutually hostile states - North Korea (the "Democratic People's Republic of Korea") and South Korea (the "Republic of Korea") - was also in its distant past a land divided into different kingdoms, with a quite homogenous population; it was only in the year 918 when a united country emerged, under a ruling dynasty named Goryeo - most likely the origin of the name "Korea", the name used by the outside world when referring to the country. From the fossil records it is claimed that people already lived here over 100,000 years ago and possibly earlier; palaeolithic pottery finds are dated to around 10,000 BCE and Neolithic finds 4,000 years later. According to the founding legend of the first Korean kingdom, in the year 2333 BCE Dangun Wanggeom, said to be the "grandson of heaven" and the "son of a bear", founded Gojoseon ("Ancient Joseon"), located in the northern part of the Korean Peninsula plus land around present-day Liaoning and Manchuria (north western China). Gojoseon was defeated by the Han dynasty of China in 108 BCE and its territories, in present-day Manchuria and the northern Korean peninsula, were occupied by a number of small states, including the largest of those, Goguryeo, that managed to gradually conquer and absorb all its neighbours. Meanwhile, in the south, a state referred to as Jin had emerged during the 2nd and 3rd centuries BCE: it was probably a federation of small states, among them Mahan in the south west of the peninsula and, among others, Jinhan in the south east.

The kingdom of Baekje was founded in 18 BCE in Mahan territory and Silla, according to tradition, in 57 BCE by uniting six chiefdoms within Jinhan and, later, absorbing a small confederacy called Gaya in the far south of the peninsula. This marked the start of what is referred to as the Three Kingdoms period: Goguryeo, Silla and Baekje. This lasted until Silla, allied with China under the Tang dynasty, conquered Baekje in 660 and Goguryeo in 668, ushering in the "North-South states" period with "Later Silla" to the south and to the north the Kingdom of Balhae, initially established under the name "Jin" in 698, a large state that eventually occupied areas within present-day northern Korea, areas of China's Northeast, and what is now Russia's Maritime Province. In the year 918 Goryeo was founded and replaced Silla as the ruling dynasty of Korea. At first it comprised present-day South Korea and about 1/3 of North Korea, but gradually most of the Korean peninsula was recovered and territories beyond, that were later abandoned. The name "Goryeo" is a short form of "Goguryeo", indicating it considered itself a successor to the old kingdom with that name. The capital was Kaesong, now the southernmost city of North Korea. During its existence it was frequently attacked by nomadic empires, especially the Khitans and the Mongols: the latter mounted seven major campaigns from the 1230s until the 1270s, but never conquered the country. Even so, Goryeo capitulated to Kublai Khan and submitted to the overlordship of the Mongol Yuan dynasty in China as a semi-autonomous vassal state.

In 1392 a general named Yi Seong-gye overthrew the Goryeo dynasty after staging a coup and named his new dynasty Joseon; as King Taejo he moved the capital from Kaesong to Hanseong (formerly Hanyang, modern-day Seoul) and built the Gyeongbokgung palace and Jongmyo shrine there: Neo-Confucianism was adopted as the country's official ideology, resulting in much loss of power and wealth by the Buddhists. The Joseon kingdom was nominally a tributary state of China but exercised full sovereignty. It experienced a golden age during the 15th and 16th centuries, with great cultural and scientific achievements. The unique Korean alphabet, Han'gul, was promulgated by one of its most notable rules, Sejong the Great, who ruled from 1418 to 1450. In 1592 and again in 1597, the Japanese invaded Korea and the resulting Imjin wars devastated the country; although the Japanese were eventually defeated, Korea experienced less than 30 years thereafter, in 1627, an invasion by the Manchus, a Tungusic people, who went on to conquer Ming China and establish the Qing dynasty. Korea, after stabilising relations with Qing China, experienced nearly 200 years of peace; it protected itself from outside influences, especially Western imperialism, earning the nickname of "Hermit Kingdom". This lasted until 1871, when Japan, under its new Emperor Meiji, who opened his own country to the outside world, started to force Korea out of China's traditional sphere of influence into its own; after attacking two Korean ports, showing military superiority, it pressed Korea to sign the "Japan-Korea Treaty of Amity" on 26 February 1876, aiming to end Joseon's status as a tributary state of Qing China and opening three ports, Busan, Incheon and Wonsan, to Japanese trade. It gave extraterritorial rights to Japanese citizens in Korea and was the first of many unequal treaties between the two countries. Shortly after a peasant rebellion and sweeping reforms aimed at revamping Korea's antiquated society, the "Greater Han Empire" was proclaimed by King Gojong in October 1897, now Korea's superficial historic ties as a tributary of Qing China had been completely severed.

In 1904 another coercive treaty between the Japanese and Korean Empires was signed and from then on Japanese interference in Korean affairs increased even more, especially after the end of the Russo-Japanese War in 1905, when the Empire of Korea was declared a protectorate of Japan. In 1907 Emperor Gojong was forced to abdicate in favor of his son, Emperor Sunjong, who became the second and last emperor of Korea: on 22 August 1910 the Korean Empire was abolished and annexed by Japan with the forced Japan–Korea Annexation Treaty, beginning a 35-year period of Japanese colonial rule, under the designation "Dependency of Chosen" (=Joseon). During this time industrialisation was greatly accelerated, although for the purpose of benefiting Japan. Many Japanese were sent as settlers, Korean people were exploited, Korean history and culture were marginalised: Gyeongbokgung, the Korean royal palace, was demolished, starting in 1911, shortly after the annexation of Korea by Japan; ownership of land at the palace was transferred to the Japanese Governor-General of Korea and in 1915, on the pretext of holding an exhibition, more than 90% of the buildings were torn down. Following the exhibition, the Japanese leveled whatever still remained and built their administrative headquarters, the Government-General Building, on the site. Dissent was brutally suppressed. During the Second World War Koreans were conscripted to work in Japan under appalling conditions and from 1944 into the Japanese army as well, where many fought just as ferocious as the Japanese. And Korean women and girls were forced into sexual slavery by the Imperial Japanese Army ("Comfort women"). It all came to an end on 15 August 1945 when Japan surrendered to the Allies and three weeks later American forces arrived at the southern part of the Korean Peninsula, while the Soviet Army and some Korean Communists had stationed themselves in the northern part. It was then proposed by the Americans that Korea should be split at the 38th parallel, determining postwar spheres of influence between the Americans and the Soviets. By 1948 there were two states, with two governments, each claiming to be the legitimate government of all Korea: neither side accepted the border to be permanent.

On 25 June 1950 North Korean forces, supported by the Soviet Union and Communist China, moved to the south to unite the country; the United Nations Security Council condemned this as a hostile invasion, demanded a ceasefire and two days later United Nations forces, with personnel from 21 countries, were dispatched to defend South Korea. Although two months into the conflict South Korea was on the point of defeat, a daring amphibious counter offensive under U.S. General MacArthur at Incheon turned the tide. In October 1950 Chinese forces entered the war and the Korean War became intensely vicious with massive civilian casualties; Seoul changed hands four times. An armistice was signed on 27 July 1953 and a "Demilitarised Zone" (in practice probably the most militarised zone in the world) was created, separating the North and the South with a border running in a roughly southwest to northeast direction, crossing that 38th parallel. Because no peace treaty has been signed, North Korea (the "Democratic People's Republic of Korea") and South Korea (the "Republic of Korea") are technically still at war. Although calling itself a "Democratic People's Republic", North Korea is a Stalinist dictatorship where democracy is non-existent, the people have no voice and the regime is more akin to a hereditary absolute monarchy: Kim Il-sung, a guerrilla leader who came to power with Soviet support in 1946 was succeeded upon his death by his son Kim Jong-il and the country is now run by his grandson Kim Jong-un. The personality cult of the Kim dynasty is extreme and, although until the 1960s economic growth was higher than in South Korea, and North Korean GDP per capita was equal to that of its southern neighbour as late as 1976, the economy declined when Kim Il-sung turned away from China after Mao's death and almost completely collapsed after the dissolution of the Soviet Union in 1991 when all Russian aid was suddenly halted. Although the population has been suffering from famine, it has a space program, nuclear weapons and a huge army.

South Korea, backed by the United States, was strongly anti-communist under the first president Syngman Rhee, whose autocratic, corrupt regime came to an end in 1960. Political instability followed, including the assassination of President Park Chung-hee and a coup d'etat in 1979 by General Chun Doo-hwan. Government repression and despotic rule continued until 1987, when it became a multi-party democracy with universal suffrage - Asia's most advanced democracy with high government transparency, universal healthcare, freedom of religion and fundamental rights protected by the most developed rule of law in East Asia. Nowadays South Korea is East Asia's most developed country and has the highest median household income in Asia. It has the world's third highest health adjusted life expectancy. It is an industrial giant, home of Samsung, the world's leading smartphone and TV maker, LG and car manufacturers Hyundai-Kia, exported all over the world. It has the world's fastest Internet speed: in 2005, it became the world's first country to fully transition to high-speed Internet. But at the same time it has meticulously restored and reconstructed its cultural heritage and holds dear to its traditions, its language, its cuisine and its splendid landscapes. It is a marvellous country for the visitor, who can expect great hospitality and friendliness. An easy country to get around, with fast, reliable transport in total freedom, South Korea has it all. As a contrast, North Korea may only be visited on a tightly regulated escorted tour from China, the border with its "Demilitarised Zone" may not be crossed and can only be seen from four view points on the southern side! Still a "Hermit Kingdom", North Korea calls itself "Choson" (= Joseon, the name of the last royal dynasty), while South Korea calls itself "Hanguk" (= Han Nation, referring to the "Greater Han Empire", the name of the country before it was annexed by Japan in 1910).