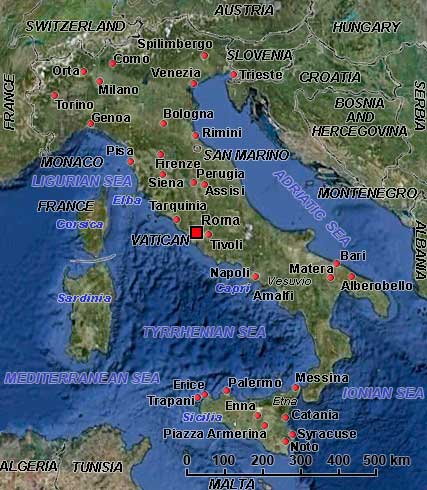 A short history of Italy

The Republic of Italy occupies a boot-shaped peninsula that extends into the Mediterranean Sea from southern Europe. The country also includes two large islands, Sicily and Sardinia. Two independent countries lie within Italy’s borders: the tiny Republic of San Marino, in north-central Italy, and Vatican City, which is entirely located within the city of Rome. The country has a wealthy cultural heritage with spectacular churches and museums containing some of the world’s best-known art objects. There are warm, sandy beaches, clear lakes, high, glacier-topped mountain peaks and rolling hills covered with green fields and vineyards. Its landscape is dominated by two mountain ranges, the Alps and the Apennines. The Alps tower across the northernmost part of Italy. The Apennines form a backbone that runs nearly the entire length of the peninsula. The country boasts several world-famous cities. Rome, the capital and largest city of Italy, was the centre of the Roman Empire 2000 years ago. Florence was the home of many artists of the Renaissance, a period of outstanding achievements in the arts. Venice, with its intricate canal system, attracts tourists from all over the world.

For hundreds of years, the history of Italy dominated the history of Western civilisation. But the Italian peninsula has been occupied much longer than that. During the last ice age, more than 20,000 years ago, Neanderthals lived here, and by 5000 BCE, Neolithic farmers were established all over the peninsula. Around 2000 BCE, several Italic tribes, such as the Umbrians, the Latins (from which the Romans emerged), Volsci, Samnites, the Celts, and the Ligures inhabiting northern Italy with their own unique cultures. Around the end of the 8th century BCE (although another school of thought puts the date as far back as the 12th century BCE), the Etruscans arrived, possibly from present-day Turkey. They spoke a unique non-Indo-European language and established a flourishing civilisation between the Arno and Tiber valleys with other settlements in Campania, Lazio and the Po Valley. One of the best examples of Etruscan culture is the famous painted tombs in Tarquinia, near Rome. Greek settlements were established in the 8th century BCE, especially along the peninsula’s southern coast and in Sicily.

The story of modern Italy begins with the founding of the first Roman Republic in 509 BCE. It gradually grew, and by the 4th Century BCE, Rome had started annexing Etruscan cities; within a century, Etruria was conquered by Rome. Ancient Rome began its overseas conquests during the 2nd century BCE. It reached its greatest extent under Emperor Trajan in 117 CE when the Roman Empire controlled all the lands bordering the Mediterranean Sea. The empire influenced the government, the arts, and the architecture of many later groups of people. After the fall of Rome in 476, Germanic tribes like Ostrogoths, Lombards and Normans ruled the land; all were eventually absorbed into the local culture. The Germanic Franks defeated the Lombards or Langobards, who ruled in northern Italy in 754 and 756. They donated these lands to the pope. The Papal States, under the direct rule of the pope, existed from 175 until 1870. In the Middle Ages, there were powerful city-states. From the 1500s, much of the country was under Spanish or Austrian rule.

After the French Revolution, Napoleon Bonaparte embarked on an invasion of Italy in 1796 and drove the Austrians out of Lombardy. They founded the “Cispadane Republic”, under French army protection, from the provinces of Modena, Bologna, Ferrara and Reggio Emilia, south of the Po river. In 1797 Napoleon negotiated peace with Austria, in which France gained control of most of northern Italy. The “Cispadane Republic” merged with the “Transpadane Republic” (formed by the French from the Duchy of Milan north of the Po river) to create the “Cisalpine Republic”; its capital was Milan. Austria received the Venetian Republic. In 1802 it changed its name to “Italian Republic”, and Napoleon became its president. Meanwhile, to the south in Tuscany, the classical name Etruria was revived. The “Kingdom of Etruria”, another short-lived creation of Napoleon I of France, existed from 1801 to 1807. On 17 March 1805, the “Italian Republic”, whose president was Napoleon, became the “Kingdom of Italy”, with Napoleon as King. He was crowned in Milan’s cathedral. The kingdom gained large territories until its collapse in 1814, including the coast of present-day Slovenia and Croatia. Meanwhile, the southern half of the peninsula was administered by Joachim Murat, Napoleon’s brother-in-law, the crowned King of Naples.

Napoleon had to abdicate both the thrones of France and Italy on 11 April 1814, and soon the kingdom collapsed. Austrian forces took power in Lombardy, and the former monarchies were reestablished. In 1848 liberal revolutions swept through Europe, and the House of Savoy, which ruled Sardinia’s Kingdom, became the main player. Unsuccessful in 1848, it attacked Austria in 1859, liberating Lombardy. In 1860-61, Giuseppe Garibaldi led the drive for unification in Naples and Sicily, allowing the Sardinian government, led by the Count of Cavour, to declare a united Italian kingdom on 17 March 1861. Victor Emmanuel II (1820-1878) was the king of Sardinia from 1849 to 1861 and the first king of a united Italy from 1861 to 1878. In 1866 Italy acquired the Venetian lands, and in 1870, the Papal States. Italy became a colonial power towards the end of the 19th Century and in 1922 embraced fascism under Benito Mussolini. Fascist Italy occupied Ethiopia in 1935, annexed Albania in 1939 and allied with Nazi Germany. The allied invasion of 1943 led to the collapse of the Fascist regime. After the war, as the result of a referendum, the monarchy was abolished, and Italy became a republic in 1946.

Italy has become a prosperous nation and is a top-rated holiday destination for people from the colder north of Europe. Its history and culture, combined with its natural beauty and climate, make Italy a great place to visit. The Italian cuisine is unsurpassed, and its wines are second to none. Italian fashion and its high-performance cars are the envy of the world. The Italian people are passionately proud of their country and its culture, although their loyalty is first and foremost with their family. It is diverse with significant regional differences, especially between the more industrialised north and the rural and traditionally poorer south. But wherever you go, Italy is a delight to visit.