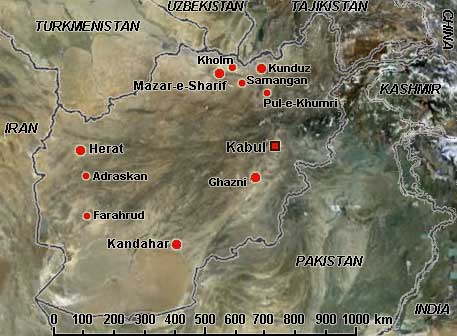 A short history of Afghanistan

Afghanistan, situated between the Indian subcontinent, Central Asia, and the Middle East, is a landlocked and mountainous country of 647,500 km², with plains to the north and southwest and with Mount Nowshak, at 7,485 metres above sea level, as its highest point. The country has a continental climate with very harsh winters in the central highlands, the northeast and the Wakhan Corridor. The average January temperature is below -15°C with hot summers in the low-lying areas of Sistan Basin in the southwest, the Jalalabad basin in the east, and the Turkistan plains along the Amu River of the north, where temperatures average over 35°C in July. It is at the crossroads of Asia, central to wars, migrations, and trade that has always dominated this part of the world. Foreign powers have never been able to dominate it: the British discovered this in the 19th century, the Soviets from 1979 to 1989, when they lost close to 50,000 soldiers and the Americans and their allies from 2001 to the present day. The Afghan people have suffered terribly, losing an estimated one million people.

It can be said that modern Afghanistan began with the Durrani Empire of 1747, but its ancient history can be traced to at least 50,000 years ago when there were farming communities here which were amongst the earliest in the world. Ancient Iranian peoples established the dominant role of Indo-Iranian languages in the region, and urban civilisation may have begun as early as 3000 BCE. In its long history, the land was conquered and integrated within vast empires, including Alexander the Great’s Macedonian army which overthrew the Achaemenid Persian Empire in 330 BCE. The Indian Maurya (or Mauryan) Empire brought Buddhism and ruled southern Afghanistan until about 185 BCE. Arabs brought Islam in the 7th Century CE, but in 1219 Genghis Khan and his Mongols overran and devastated the region. Babur, a descendant of both Timur and Genghis Khan, arrived from Central Asia and captured Kabul, making it his capital in 1512 until 1526 when the centre of the Mogul Empire moved towards India. In the early 18th century local tribal leaders rebelled against the Persian Safavids who then controlled the western part of what is now Afghanistan. In 1747 Ahmad Shah Durrani was proclaimed as leader of what became known as the Durrani Empire, centred around Kandahar, and this is generally considered as the beginning of modern Afghanistan.

During the 19th century, conflict arose with the British, entrenched in India and fearing a Russian invasion after the Russian Empire had expanded into Central Asia. (The “Great Game”, the strategic rivalry and conflict between the British Empire and the Russian Empire for supremacy in Central Asia). The British invaded Afghanistan, sparking the First Afghan War (1839-1842) which ended in disaster for the British. The Second Anglo-Afghan War was fought from 1878 to 1880, after which Afghanistan saw much of its territory and autonomy ceded to British India. Ethnic Pashtun regions were divided by the 1893 Durand Line, an action which would lead to strained relations between Afghanistan and British India (later the new state of Pakistan). The United Kingdom exercised a great deal of influence, and it was not until the reign of King Amanullah Khan on 8 August 1919 that Afghanistan re-gained independence over its foreign affairs after the signing of the Treaty of Rawalpindi, ending a three month “Third Anglo-Afghan War”.

King Amanullah ended his country’s traditional isolation in the years following the Third Anglo-Afghan War. He established diplomatic relations with significant countries and, following a 1927-28 tour of Europe and Turkey, introduced several reforms intended to modernise his nation. Faced with overwhelming opposition to many of his reforms, Amanullah Khan was forced to abdicate in January 1929 after Kabul fell to rebel forces led by Habibullah Kalakani. Prince Mohammed Nadir Shah, Amanullah’s cousin, in turn, defeated and killed Kalakani in October 1929, and was declared King Nadir Shah. He was assassinated in 1933 and succeeded by his son Mohammed Zahir Shah, who reigned until 1973 when his brother-in-law Daoud Khan launched a bloodless coup while the King was on an official overseas visit, abolished the monarchy and became the first president of the Republic of Afghanistan.

On 27 April 1978, a Marxist coup took place by military officers, who handed power to the communist People’s Democratic Party directed by Nur Muhammad Taraki three days later. Then, in September 1979, the radical Prime Minister Hafizullah Amin staged a coup in which Party Chief Taraki, who had appointed Amin, was killed; Amin became president. Later that year Soviet troops invaded and occupied the country, handing power from the communist “Khalq” to the “Parcham” faction, led by Babrak Karmal, on 27 December 1979; President Amin was killed, probably executed. In the face of fierce resistance from “Mujahedeen” fighters, Soviet troops gradually withdrew in 1986 and the following year, on 30 November 1987, General Mohammed Najibullah, who had succeeded Karmal, was appointed president. The Soviet occupation ended in 1989 and the former resistance fighters established the Islamic State of Afghanistan in 1992. However, conflicts among themselves for control of the country resulted in a constant civil war. Then from 1995 the “Taliban”, consisting of Pashtu speaking Afghani exiles and Pakistani, invaded the country and gradually established control.

After the Taliban had captured Kabul in late 1996, the country changed its name to Islamic Emirate of Afghanistan and subjected the people to a harsh interpretation of Islam, with men requiring to wear beards, women forbidden to work and children even forbidden to fly kites. The regime was not recognised internationally and collapsed after American bombardments following the terrorist destruction of New York’s World Trade Center on 11 September 2001. A provisional government was formed with interim leader Hamid Karzai, who became President in June 2002. However, his influence was limited. Despite a large presence of foreign troops, the Taliban remained a force to be reckoned with, especially in the south. Most foreign troops departed, and after elections in 2014, Ashraf Ghani became President of the Islamic Republic of Afghanistan. In 2020 the United States under President Donald Trump signed a treaty with the Taliban that the US would withdraw its troops in exchange that the Taliban would not harbour terrorists. The following year President Joe Biden announced the US would completely withdraw by 11 September, exactly 20 years after the destruction of the World Trade Center. NATO withdrew its troops in May 2021 and the Taliban in quick succession conquered almost all of the country. On 17 August 2021 the Taliban was in full control of Kabul and President Ashraf Ghani had fled to the United Arab Emirates. The Islamic Emirate of Afghanistan, deposed by the US, was back in control while thousands attempted to flee the country.

Afghanistan has had a very unhappy recent history with great suffering for its people, which is heartbreaking, as the country is impressively beautiful, the Afghan people proud, dignified and very hospitable in their splendid Muslim tradition. These photos show Afghanistan in happier times, in November 1973, when it was part of the “hippy trail” when travellers could safely traverse the country by public bus, stay in low budget hotels and eat in simple local eating places. This then is the “real” Afghanistan and its people as it was just after it changed from a monarchy to a republic; this time is now fondly called a “golden age” by many Afghans.....