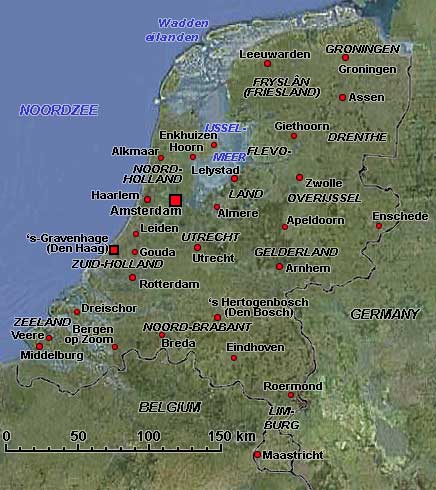 A short history of the Netherlands

The Kingdom of the Netherlands, a name referring to low-lying land ("Nederland" in Dutch), is often called Holland (roughly meaning the same), the region that historically has been dominant. It lies on the south shore of the North Sea and shares a border with Germany to the east and Belgium to the south. It is one of Europe's smallest and most densely populated countries; its capital is Amsterdam although the seat of government is in 's Gravenhage, more commonly called Den Haag, a name that translates as The Hague. The Kingdom of the Netherlands is a parliamentary democracy; its head of state since 1980 is Queen Beatrix of the House of Orange. Executive power is vested in a council of ministers ("Cabinet") that is responsible to the lower house of parliament. The parliament, or Staten-Generaal, is bicameral with an upper house ("Eerste Kamer") of 75 members, elected for six-year terms by the provincial councils, and a lower house ("Tweede Kamer") with 150 members elected by popular vote for four-year terms. Seats in the lower house are awarded to political parties under a system of proportional representation.

The coastal areas of the Netherlands to the north and west are low lying and much of the land in this area was recovered from the sea by draining low-lying marshes to create "polders". These reclaimed lands which have the best quality soil for farming, dominate the landscape. Much of this land lies below sea level and the sea is kept at bay by an intricate system of dams, dikes, and sluices. Large reclaimed areas include the Wieringermeer polder in the north of Noord-Holland province and the three large polders created by partially draining the IJsselmeer, formerly called Zuiderzee, the large inland sea; the new province of Flevoland is entirely made up of this reclaimed land. There is a saying that "God made the world with the exception of the Netherlands; that was made by the Dutch themselves".

The "High Netherlands" in the east and south, have a few low hills; the highest being the Vaalserberg at the point where the Netherlands, Belgium and Germany meet, is only 321 metres high. The Rhine (Rijn in Dutch) and the Meuse (Maas) are major rivers, flowing from resp. Germany and Belgium merge here and form a system of smaller rivers, flowing into the North Sea past the largest harbour in the world near the city of Rotterdam. The Netherlands has a north European maritime climate with plenty of rain, about 70,000 mm annually, evenly distributed throughout the year, with average temperatures of around 3° C in January and 17° C in July. A warm summer day would be about 25° C.

The area was inhabited by Germanic tribes since ancient times, occupied by the Romans and in the Middle Ages was made up of various semi-autonomous lands held by dukes, counts and even a bishop. Under Charles V, the Holy Roman Emperor and King of Spain, the present Netherlands, most of present-day Belgium, Luxembourg, and some regions of France and Germany were included in the "17 Provinces", resulting in the Eighty Years' War with Spain from 1568 - 1648. The northern half of this region formed the Union of Utrecht in 1579 to support each other in their defence against the Spanish, considered the foundation of the modern Netherlands. This was not recognised by the Spanish and war continued until at last Spain finally had no choice but to recognise the independence of the seven northwestern provinces in the Peace of Münster.

In 1581 the provinces of Holland, Zeeland, Groningen, Friesland, Utrecht, Overijssel, and Gelre (now Gelderland) federated as the Republic of the Seven United Netherlands. These provinces had their own governments, with a confederal government of representatives from each of the seven provinces, the "Staaten-Generaal" (States-General), in The Hague. Some southern, mainly Roman Catholic regions, were directly governed by the States-General and became a buffer between the Republic and the former Spanish (later Austrian) Catholic southern provinces. The Republic became one of the major seafaring and economic powers of the 17th century. In the Dutch Golden Age ("Gouden Eeuw"), colonies and trading posts were established all over the world.

On 19 January 1795 under the influence of Revolutionary France, the "Bataafse Republiek" (Batavian Republic) was proclaimed, names after the Batavi, a Germanic people that lived in here during Roman times. The state was modelled after the French Republic, a unitary state and dominated by France. In 1806 Napoleon Bonaparte, to establish total control, proclaimed the "Koninkrijk Holland" (Kingdom of Holland), a puppet state governed by his brother Louis Bonaparte: the name of the leading province, Holland, was used for the whole country (something that, informally, is often still the case, especially by foreigners!). The Kingdom of Holland covered the area of the present day Netherlands, except Limburg and parts of Zeeland, which were directly ruled by the French, but including Ostfriesland (East Frisia, in present day Germany). On 1 July 1810 Louis Bonaparte was forced to abdicate as he favoured Dutch interests over the French and Napoleon annexed the country outright in 1810. He was, after his defeat in the Battle of Leipzig in 1813, forced to withdraw his troops from the country.