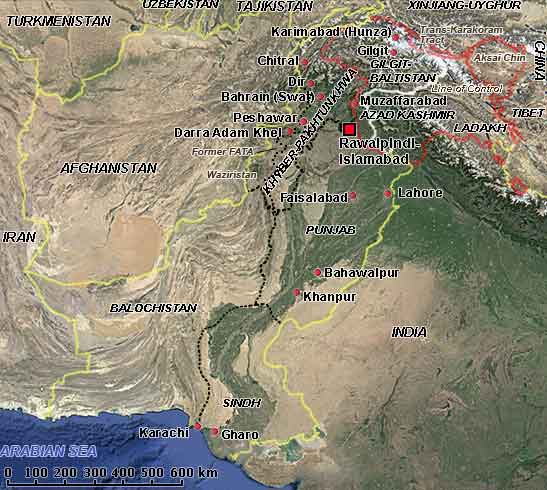 A short history of Pakistan

The Islamic Republic of Pakistan, with the world’s second-largest Muslim population, is a country in south Asia with a coastline on the Arabian Sea. Afghanistan and Iran border it in the west, India and China in the east, although those borders are disputed on all sides. Pakistan has an area of almost 882,000 km² and a population of over 212 million. The area that is now Pakistan has been inhabited for millennia; the oldest Neolithic site in South Asia is in Mehrgarh, present-day Balochistan and around 8,500 years old. It was one of the earliest Bronze Age civilisations globally, centred on the Indus Valley between 3300 and 1300 BCE. Harappa, south of Faisalabad in Punjab and Mohenjo-Daro, north of Karachi in Sindh Province, are two of the more famous sites discovered.

Between 1500 and 500 BCE, an Indo-Aryan Hindu culture flourished here, and various empires and dynasties ruled the region, like the Persian Achaemenid Empire, that of Alexander the Great (in 326 BCE), and the Maurya Empire (333-185 BCE that encompassed almost all of the Indian subcontinent. An Indo-Greek Kingdom, Yavanarajya, existed in present-day Afghanistan and the Punjab region for about two centuries from 180 BCE. Its culture was a combination of Greek and Buddhist beliefs. From 489–632 CE a kingdom, centred in the Sindh region flourished: the Rai Dynasty. The last Buddhist empire in the area was the Pala Dynasty stretching over the northern Indian subcontinent to present-day Pakistan.

In 711 CE, the Arab conqueror Muhammad bin Qasim conquered Sindh and Islam spread throughout the region: Sufi missionaries converted most regional Buddhists and Hindus to Islam. Several Muslim empires ruled in the area: the Ghaznavid Empire from 975 to 1187 CE and the Ghorid Kingdom (from around 875 to 1215) were of mainly Persian origin and based around present-day Afghanistan. The Delhi Sultanate (1206–1526) stretched over most of the Indian subcontinent, including today’s Pakistan. The Mughal Empire, founded in 1526 by Babur, a warrior chieftain in present-day Uzbekistan, conquered most of northern India. Over two centuries, it expanded to all of present-day India, Pakistan, Bangladesh and Afghanistan. The Mughals introduced Persian literature and high culture, establishing the roots of Indo-Persian culture in the region. Their main centres in Pakistan were Lahore, in the Punjab, and Thatta in Sindh. At its peak, their empire stretched as far as Peshawar, in northeast Pakistan.

In the 18th century, however, the decline had set in after Emperor Aurangzeb’s death in 1707. In 1747 the Durrani Empire, based in Afghanistan, conquered Peshawar. Two years later, the Mughal Emperor Ahmad Shah Bahadur had ceded to the Afghans sovereignty over Punjab, Sindh, and Kashmir to prevent his capital from being attacked. In 1751-52 a treaty was signed between the Mughals and the Maratha Empire or Confederacy. The treaty gave the Marathas control over almost all of the Indian subcontinent. The Marathas originated in present-day Maharashtra (India) and were Hindu. In 1757, after defeating the Afghan garrison in the Battle of Delhi, they extended their control to the northwest, capturing Peshawar in 1758. Ahmad Shah Durrani declared “jihad”, holy war against the Marathas and by 1761 had defeated them, but now the Sikhs had started to invade, and despite bloody battles and the death of thousands of Sikhs, Punjab fell to the Sikhs. During the 18th century, Sikh “misls”, sovereign states, had formed in the Punjab region, and in 1799, Maharaja Ranjit Singh captured Lahore from its Afghan ruler, Zaman Shah Durrani. He expelled the Afghans from Punjab, united the Sikhs and established the Sikh Empire (also known as Sarkar-e-Khalsa or Kingdom of Punjab) in 1799. It extended at its peak from the Khyber Pass in the west to Kashmir and western Tibet in the east. However, in 1849 the British defeated it in the Anglo-Sikh wars, and it was the last major region of the Indian subcontinent to be annexed by the British Empire.

By the early 18th century, Europeans had discovered the region; the English East India Company had established coastal outposts and in 1765 had established control over the Indian subcontinent. In 1818 the British ended the Maratha Empire’s independence as the outcome of the Third Anglo-Maratha War, and by 1820 the Indian subcontinent was ruled by the East India Company. The Company allied itself with local rulers, creating the various princely states. In 1858, after the Indian Rebellion of 1847, the rule was transferred to the British Crown in Queen Victoria’s person; she was proclaimed Empress of India in 1876. In 1893 a boundary was established running through the tribal lands between Afghanistan and British India, marking their respective spheres of influence. It was negotiated between Sir Mortimer Durand and Afghanistan’s amir but was never intended as a permanent border. However, this “Durand Line” has remained the border, leaving the land of the Pashtuns divided between Afghanistan and Pakistan. Since the mid-20th century, there has been a movement aiming to reunite the Pashtun lands into one independent state, Pashtunistan.

The British Raj (from “rule” in Sanskrit) lasted until 1947. Divergence in the relationship between Hinduism and Islam created a major rift in British India, a movement to establish a modern system of education for the Muslim population had grown. In 1906, Sir Syed Ahmed Khan founded a Muslim intellectual movement to counter the Hindu renaissance. It envisioned and advocated for the two-nation idea and led to creating the All-India Muslim League in 1906. In 1930 Muhammad Iqbal, a writer, philosopher and politician, called for “the amalgamation of North-West Muslim-majority Indian states” consisting of Punjab, North-West Frontier Province, Sind, and Baluchistan. Perceived neglect by the Indian Congress 1937–39 convinced Muhammad Ali Jinnah, the founder of Pakistan, to espouse two nations’ idea. The end of British rule in 1947 forced them to accept the Partition of the country. Jinnah had emerged as the sole spokesperson of Indian Muslims - and on 14 August 1947, the Dominion of Pakistan was established with Jinnah as President. It comprised Balochistan, the North-West Frontier Province, West Punjab, Sindh and East Bengal (since 1971 independent as Bangladesh).

The name “Pakistan” was coined in 1933 by Choudhry Rahmat Ali, a Pakistan Movement activist. He used the initial letters of the five northern regions of the British Raj: Punjab, Afghania, Kashmir, Sindh, and the last three letters of Baluchistan. The resulting “Pak” also means “pure” in Persian and Pashto; “estan” or “istan” in Persian means “a place which abounds in...”, so “Pakistan” can mean “a land in which the pure abound”. Initially a dominion of the British Commonwealth, it became an Islamic republic in 1956. Although some of the Princely states had continued in the new Pakistan, in 1969, all Frontier States of Dir, Chitral and Swat were finally abolished during General Yahya Khan’s rule and completely taken over by the Government of Pakistan. In 1971 East Pakistan seceded as Bangladesh after a bloody civil war. Since then, Pakistan was ruled by governments, civilian and military, democratic and authoritarian, relatively secular and Islamicist. It has often uneasy relations with India, especially about Jammu and Kashmir, divided between the two and, like India, is a nuclear power. But it is a beautiful country, with spectacular scenery and architecture, and, for the traveller, very friendly and hospitable people.