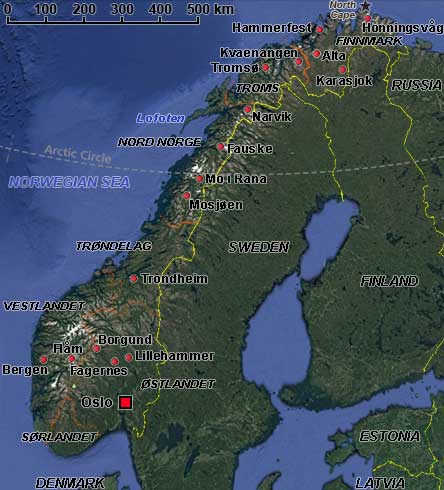 A short history of Norway

The Kingdom of Norway is a Nordic country in Northern Europe whose mainland territory comprises the western and northernmost portion of the Scandinavian Peninsula. The remote Arctic island of Jan Mayen and the archipelago of Svalbard also form part of Norway. The country has a total area of 385,207 km² and a population of 5.4 million. It has a long eastern border with Sweden, and to the north-east, it is bordered by Finland and Russia. Its extensive coastline faces the North Atlantic Ocean and the Barents Sea. Norway has two official names: Norge in Bokmål (literally “book tongue”), an official written standard for the Norwegian language, alongside Noreg in Nynorsk (“New Norwegian”, the other of the two written Norwegian language standards. Nynorsk was established in 1929 as the state-sanctioned fusion of a standard Norwegian language (Landsmål) with the Dano-Norwegian written language (Riksmål). The written standard is a Norwegianised variety of the Danish language, Norway’s written language until 1814.

Since the 11th to 10th millennia BCE, the country has been inhabited, when Upper Paleolithic nomads hunted wild reindeer on the tundras, possibly using bows and arrows. Finds have been made along the coast: the interior was still covered with ice. Dwelling sites dating from about 5000 BCE show that hunting and fishing peoples used stone implements and produced petroglyphs (rock carvings). Between 3000 and 2500 BCE, new settlers arrived from the south in what is now eastern Norway. These Indo-European farmers grew grain, kept cows and sheep, and gradually replaced the hunting and fishing people along the coast. Although bronze appeared from 1500 BCE, the implements remained mainly stone; rock carvings depicted ships and burial monuments in the shape of boats means that seafaring had become very important.

It appears that during the early Iron Age, from 500 BCE onwards, the dead were cremated. During the first four centuries CE there was contact with Roman-occupied Gaul (now France), and Roman bronze cauldrons appeared, often used as burial urns. During this time a written form of the language was developed: the runic script, the oldest known inscription in Norway dating back to the 3rd Century CE. By the 5th century, Germanic peoples had brought the Western Roman Empire to an end. By now tribal chiefs were buried with weapons and gold objects, hill forts were built and large farmhouses, where several generations lived, appeared.

In 872 a chieftain, Harald Fairhair (Haraldr inn hárfagri in old Norse), according to medieval historians, became the first king of a united Norway. He unified the Norse peoples who had started to go out in their ships to other lands by this time. In the year 793, the monastery at Lindisfarne in Northeast England was looted by Norse people, and this event is considered the start of the Viking Age. The Viking seafarers colonised, raided and also traded all over Europe: they settled in the northern and western British Isles, the Faroe Islands, Iceland, Greenland and briefly in “Vinland”, nowadays Newfoundland in Canada. In the late 10th and 11th centuries, Christianity replaced the ancient Norse traditions. In Norway, the first Christian church was built in 995 by Olav Tryggvasson; he subsequently became King of Norway.

Norway, a sovereign state with a central administration, enjoyed a Golden Age in the 14th century, with trade essential, especially with the British isles. In 1319 Norway and Sweden were united when Magnus Erikson at age three became King of Magnus VII of Norway and was elected by nobles to the throne of Sweden as Magnus IV. In 1349 the Black Death, the bubonic plague pandemic, a fatal one in human history, killed a third of the population within one year, wiping out whole communities. During this time Norwegian trade was taken over by the Hanseatic League, establishing a trading centre in the town of Bergen. In 1380, King Olaf Haakonsson, the son of Queen Margaret I of Denmark and King Haakon VI of Norway, inherited both the Danish and Norwegian thrones, creating a union. Olaf IV died in 1386 at age 16. His mother, Queen Margaret I, who had managed Denmark and Norway’s foreign affairs during Olav’s minority and had him elected to the Swedish throne, was made temporary ruler of Denmark and was crowned Queen of Norway 1388. She chose Eric of Pomerania to be king and at an all-Scandinavian assembly in Kalmar in Sweden in 1397, Erik was crowned king of all three Scandinavian countries. Sweden included the south-west of Finland and Norway included Iceland, Greenland, the Faroe Islands, and the Northern Isles of Orkney and Shetland (now part of Scotland).

In 1521 Sweden left the Kalmar Union, but Norway was forced to remain in a union with Denmark, and in 1536 it became a Danish colony. In 1661 it was restored as a kingdom, although still united with Denmark. In the 17th century, it lost land to Sweden, resulting from war between the two countries. But it gained the northern districts of Troms and Finnmark, from Sweden and Russia. In 1814 Denmark, which had sided with Napoleon against the United Kingdom, was forced to cede Norway to Sweden’s King. The old Norwegian provinces of Iceland, Greenland, and the Faroe Islands remained with the Danish crown. Norway then declared independence and on 17 May 1814 elected Christian Frederick, the Crown Prince of Denmark and Norway, as its king. War broke out between Norway and Sweden. The outcome was that Norway had to accept a personal union with Sweden; Christian Frederick abdicated, and on 4 November 1814, Carl XIII of Sweden was elected as king of Norway. Norway kept the liberal constitution it had adopted and its independent institutions, but it shared its king and foreign policy with Sweden.

On 7 June 1905 Norway and Sweden were peacefully separated. Because there was no Norwegian who could claim royal descent, Prince Carl of Denmark was elected by the Norwegian parliament and took the name of Haakon VII. He ruled until he died in 1957. In both World Wars Norway tried to remain neutral but was invaded by German forces on 9 April 1940. It was occupied for five years, and a resistance movement fought the occupation forces in many ways. After the war Norway in 1949 became a founding member of NATO, the North Atlantic Treaty Organisation. Although it was invited twice, it declined membership in the European Union. Norway maintains a Nordic welfare model and has universal health care and a comprehensive social security system. The country has the fourth-highest per-capita income in the world on the World Bank and IMF lists. Norway ranked first on the World Happiness Report for 2017 and currently ranks first on the OECD Better Life Index, the Index of Public Integrity, and the Democracy Index; it also has one of the world’s lowest crime rates.

Back to menu at Top of the Page