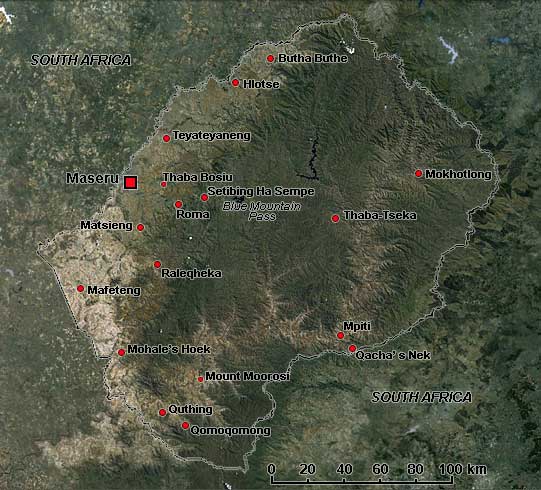 A short history of Lesotho

The Kingdom of Lesotho is a small country surrounded by the Republic of South Africa, having an area of a little over 30,000 km² and a population of just over 2 million; most people are Basotho, speaking the Sesotho language, related to Setswana, as spoken in Botswana and adjacent areas in South Africa. Its capital and largest city is Maseru. It is a strikingly beautiful country, nicknamed “The Kingdom in the Sky” because of its mountains. The narrow strip of land in the northwest, along the South African border, is heavily populated and, as a consequence, suffers greatly from soil erosion. These photos are from the early seventies.

The area’s earliest known inhabitants were Khoisan hunter-gatherers, replaced mainly by Wasja-speaking tribes during Bantu migrations. The Sotho-Tswana people colonised the general region of South Africa between the 3rd and 11th centuries. The present area of Lesotho (then called Basutoland) emerged as a single polity under the Great King Moshoeshoe I in 1822, and he became chief of his clan about 1804. Between 1821 and 1823, he and his followers settled at Butha-Buthe Mountain in the country’s north. They joined with former adversaries to resist the “Lifaqane”, the disastrous wars associated with the reign of Shaka, the leader of the Zulu, from 1818 to 1828.

After the British had seized the Cape Colony from the Dutch in 1795, Boer trekkers tried to settle in Sotho lands. Meanwhile, Moshoeshoe had invited French missionaries, who occupied the village of Morija and developed the orthography of the Sotho language; One of the missionaries, Eugene Casalis, helped the King set up diplomatic channels and even acquire weapons to defend the land against the encroachment of the Boers. Moshoeshoe eventually signed a treaty with the British Governor of the Cape Colony, Sir George Thomas Napier. He then annexed the Orange River Sovereignty (later Orange Free State), where many Boers had settled. A Sotho army defeated a British force at Kolonyama in 1851 and repulsed the British again a year later. Moshoeshoe then tried to reach an agreement with the British, who moved out in 1854.

A series of wars with the Boers in 1858 resulted in losing significant portions of the western lowlands that became part of the Orange Free State. In 1867 Moshoeshoe sent an appeal to Queen Victoria, who agreed to make Basutoland a British protectorate the following year. In 1869, the British signed a treaty with the Boers defining the boundaries of Basutoland: by ceding the western territories, this effectively reduced Moshoeshoe’s Kingdom to half its previous size. The British moved the capital from Thaba Bosiu (“Mountain of the Night”) to the army camp of Maseru, where it remains to this day. Moshoeshoe I died on 11 March 1870 and was buried at Thaba Bosiu.

Between 1871 and 1884, Basutoland was ruled from the Cape Colony. The British treated it similarly to territories that had been forcefully annexed, whereby the British wanted to westernise and disarm the Basuto people. They rebelled, leading to the Basuto Gun War in 1881, which ended with a Basuto victory. But in 1884, Basutoland became a Crown colony again, remaining under direct rule by a governor. However, traditional chiefs wielded effective internal power. Basutoland gained its independence from Britain and became the Kingdom of Lesotho in 1966. Moshoeshoe II (2 May 1938 - 15 January 1996), previously known as Constantine Bereng Seeiso, was the paramount chief of Lesotho. He succeeded Paramount Chief Seeiso from 1960 until the country gained full independence when he became King of Lesotho.

Joseph Leabua Jonathan (30 October 1914 - 5 April 1987) was the second Prime Minister of Lesotho, succeeding Chief Sekhonyana Nehemia Maseribane following a by-election, and he held that post from 1965 to 1970. Jonathan lost the election of 1970 but refused to resign. He then deposed Moshoeshoe in 1970 to reestablish his control over the country after his party lost the election. Moshoeshoe went into temporary exile in the Netherlands. A few months later, after he had gained control, Jonathan allowed Moshoeshoe to reassume the title of King, but without any real power. Despite his election defeat, Jonathan continued to hold power as an unelected Tona Kholo (Prime Minister) until 1986, when a military coup overthrew him.

The military government was chaired by Justin Lekhanya, who then ruled Lesotho in coordination with King Moshoeshoe II and a civilian cabinet appointed by the King. In February 1990, however, Moshoeshoe II was stripped of his executive and legislative powers and exiled by Lekhanya. Lekhanya was ousted the following year, but Moshoeshoe II refused to return to Lesotho under the government’s new rules in which the King was endowed only with ceremonial powers. Moshoeshoe’s son was then installed as King Letsie III, and Moshoeshoe went into exile in the United Kingdom. In 1992, Moshoeshoe II returned to Lesotho as a regular citizen until 1995, when King Letsie abdicated the throne in favour of his father. The following year, on 15 January 1996, he was killed in a car accident. Letsie III ascended the throne again but now has no executive authority and cannot engage in political affairs.