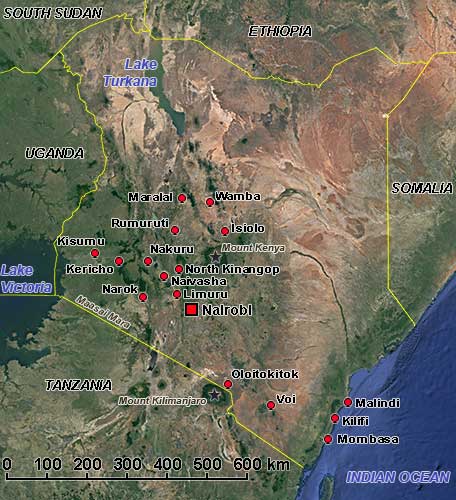 A short history of Kenya

The Republic of Kenya is a multiethnic country in eastern Africa bordered by Tanzania to the south, Uganda to the west, South Sudan to the northwest, Ethiopia to the north, Somalia to the east, and the Indian Ocean to the southeast. It has an area of almost 580,400 km² and a population of nearly 55 million. Kenya’s capital and largest city is Nairobi, with almost 4.5 million; its oldest city and first capital is the coastal city of Mombasa. Kenya is diverse, with landscapes ranging from fertile farmland and dense forests to dry regions and deserts. Mount Kenya, with 5,200 metres, is its highest mountain and the second-highest in Africa, after Kilimanjaro just across the border in Tanzania, with which it shares its unique wildlife.

Fossil records show that primates lived here for over twenty million years, including possible direct ancestors of modern humans: Homo habilis, who lived 1.8 to 2.5 million years ago and Homo erectus of between 1.9 million and 350,000 years ago. In 1984 the famous paleo-anthropologist Richard Leakey discovered the skeleton of “Turkana Boy” at Lake Turkana, a 1.6 million-year-old Homo erectus fossil. It is now believed that Kenya and other areas of East Africa are some of the earliest regions where modern humans, our direct ancestors, have lived. These were hunter-gatherers, probably akin to the Khoisan people of southern Africa. Later, Cushitic people entered present-day Kenya; they are akin to peoples in Ethiopia and Somalia. Nilotic-speaking people (ancestors to the Maasai, Samburu, Turkana and others) arrived from present-day Sudan around 500 BCE.

Originally from West Africa, Bantu-speaking farmers moved into present-day Kenya and settled along the coast by the first millennium BCE. They are the ancestors of, among others, the Kikuyu, the largest ethnic group in Kenya. On the coast were city-states like Mombasa and Malindi, trading with Arabs by the first century CE. It led to the introduction of Islam and the development of a common language, Swahili (its name derived from “sahel”, the Arab word for “coast”. It is a Bantu language, but it became a trade language between different peoples with many loanwords from Arabic and other Middle-Eastern languages. It is now an official language in Kenya, together with English, from which it also received loanwords.

In the 10th century, the Sultanate of Kilwa was founded in Tanzania by a Persian Sultan. It came to dominate the entire length of the Swahili coast. Mombasa was established as the first city in Kenya and became a major port. In the late 16th century, the Portuguese had established themselves here and built a fort on Mombasa island. By the 17th century, the Swahili coast was under the direct rule of Omani Arabs who traded slaves to work on plantations in Oman and Zanzibar. The Portuguese also bought slaves from them. In 1885 Germany established a protectorate over the coastal possessions of The Sultan of Zanzibar, including Witu. This sultanate had been founded inland from the port of Lamu, north of Malindi. It was a haven for slaves fleeing the Zanzibar slave trade, and the Sultan had asked Germany for protection against the Zanzibari raiders.

In 1888 the Imperial British East Africa Company arrived, and two years later, Germany handed its coastal holdings to Britain. The company was to administer the coastline of present-day Kenya, leased from the Sultan. In 1885 at the Berlin Conference, it was agreed that the British sphere of influence would stretch inland towards present-day Uganda. A border was established with German East Africa (now Tanzania). In 1893 the British took over from Germany the Protectorate of Witu, and on 1 July 1895, the British established the protectorate over their portion of East Africa. From 1896 immigrants from India came as traders and artisans; from 1902, white settlement was promoted in the Highlands. In 1905 the capital changed from Mombasa to the centrally located Nairobi. There was racial segregation, and the British colonised the land to establish white farms, often by burning native villagers and shooting its inhabitants when they resisted.

In 1920 the East Africa Protectorate became a colony and was renamed “Kenya”, after its highest mountain. By this time, many British and other European farmers had settled in the central highlands and made their fortune farming coffee and tea. The over a million Kikuyu people, whose land this was, had lost all claims to it and could only work as itinerant farmers or drift to the cities to make a living. By 1930, there were around 30,000 white settlers, and their number had grown to 80,000 twenty years later. In 1952 Princess Elizabeth and her husband Prince Philip were on holiday in Kenya when the news came that her father, King George VI, had died, and she returned home to be crowned Queen. But by now, the Kikuyu were rising against their British overlords.

The Kenya Land and Freedom Army, more commonly known as the Mau Mau (a term of uncertain origin), conducted an armed rebellion against British rule from 1952 to 1960. A state of emergency was declared in October 1952. The Mau Mau were mainly Kikuyu people, with Meru and Embu, but Maasai and Kamba also fought against the European settlers, the British Army and the Kenya Regiment; the latter were made up of colonists, local militia and pro-British Kikuyu. In 1956 rebel leader Dedan Kimathi was captured, and this was essentially the defeat of the Mau Mau and the end of the British Miltary campaign. But the rebellion survived even until after independence because of internal divisions, encouraged by British divide and rule tactics.

In 1957 first direct elections for African Kenyans to the Legislative Council took place, and eventually, the Kenya African National Union (KANU) formed a government under their leader Jomo Kenyatta. On 12 December 1963, Kenya became independent: the Colony of Kenya and the Protectorate of Kenya (the area along the coast that the British had leased from the Sultan of Zanzibar in the late 19th century) merged into one nation. On 12 December 1964, Kenya became a republic with Jomo Kenyatta as its first president. During his presidency, he was given the honorary title of Mzee and lauded as the Father of the Nation. His rule, however, was dictatorial and corrupt, favouring his native Kikuyu over other ethnic groups. Jomo Kenyatta died on 22 August 1978 and was succeeded by Daniel Arap Moi, a member of the Nilotic Kalenjin people. He remained unopposed, and Kenya remained a one-party state.

In 1992 there was the beginning of multi-party politics, and eventually, in 2010, after a referendum, Kenya adopted a new constitution with limited presidential powers. In 2013 the first general elections under the new constitution were held, and Uhuru Kenyatta, a son of Kenya’s first president Jomo Kenyatta, won the presidency. Kenya is now a presidential representative democratic republic with a multi-party system. It is a beautiful country with a considerable land area devoted to wildlife habitats, 60 national parks and game reserves, including the Maasai Mara on the Tanzanian border. Tourism is the second-largest source of foreign exchange revenue following agriculture. However, climate change is increasingly impacting the lives of its citizens and the environment. Recently there has been more frequent extreme weather events like prolonged droughts, irregular and unpredictable rainfall, flooding and increasing temperatures.