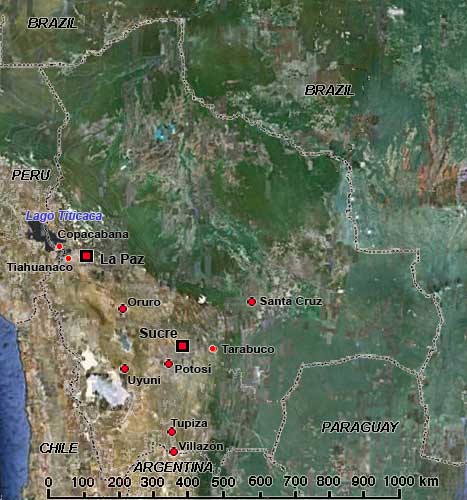 A short history of Bolivia

Bolivia is a country in central South America, with an area of almost 1,100,000 km². It lacks a seacoast; the majestic, snow-capped Andes Mountains surround western Bolivia’s high, dry plateau. A vast lowland plain spreads over the north and east. Tropical rain forests thrive in the northern part of the plain, and grasslands and swamps sprawl across much of the east. Largely hilly country lies between the Andes Mountains and the lowland plain. Bolivia is rich in natural resources and is a leading producer of tin. But frequent wars, revolutions, and a series of unstable governments have hampered the country’s economic growth. As a result, Bolivia remains a developing country with one of the lowest living standards in the Western Hemisphere.

American Indians were the first people to live in what is now Bolivia. During the 1500s, Spain conquered the Indians, and the Spanish ruled the region until 1825 when Bolivia won its independence. The new country was named after Simón Bolívar, a Venezuelan general who helped Bolivia and several other South American countries win their freedom from Spain. Today, mestizos (people of mixed white and Indian ancestry) make up about 30 per cent of the population, and about 60 per cent of the people are of true Indian origin. Bolivia has a population of roughly 8 million people, with about half living in rural areas. Almost a million people live in La Paz, the actual capital and Bolivia’s largest city, but Sucre, where the Supreme Court meets, is the official capital..

Bolivia has four major land regions: the Andean Highlands, the Yungas, the Valles, and the Oriente. The Andean Highlands covers much of western Bolivia. The Altiplano lies between two craggy Andean Mountain ranges; about 40 per cent of Bolivia’s people live on the mostly barren Altiplano, many of them in La Paz. The world’s highest navigable lake, Lake Titicaca, lies between northern Altiplano and Peru, at 3,800 metres above sea level. The Yungas make up a small region northeast of the Andean Highlands, with steep hills, narrow gorges and subtropical hillside forests. Very few people live here. The Valles lies in south-central Bolivia with gently sloping hills and broad valleys, open grasslands and numerous farms. The Oriente is a vast lowland plain spreading across northern and eastern Bolivia; tropical rain forests flourish in the north, while open grasslands, large farms, swamps, and shrubby forests cover most of the rest. Wide, slow-moving rivers flow through the Oriente, forming part of the Amazon River system.

Bolivia is a developing country but has a wealth of natural resources: numerous minerals, pastureland, timber, and fertile soil. Mining accounts for about 13 per cent of Bolivia’s GDP and employs approximately 3 per cent of all workers. Tin is Bolivia’s most important mineral, but its significance is now declining. However, the country still ranks among the world’s leading tin producers. Agriculture accounts for about 32 per cent of Bolivia’s GDP. The Altiplano farmers grow potatoes, wheat, quinoa grain and raise llamas and alpacas for their wool. The Yungas and the Valles regions produce bananas, beans, cacao, coffee, and corn. Coca, from which the drug cocaine is made, is another essential crop of the Yungas. Bolivia is one of the world’s leading growers of coca. In the Oriente, farmers raise cattle and grow cotton, rice, and sugar cane.

American Indians lived in what is now Bolivia as long as 10,000 years ago. About 100 CE, a major Indian civilisation developed in the Tiahuanaco region near Lake Titicaca. The Tiahuanaco Indians built gigantic monuments and carved stone statues. Their society declined rapidly during the 1200s. By the late 1300s, the Aymara, a warlike tribe, controlled much of western Bolivia. The Inca Indians of Peru defeated the Aymara during the 1400s and made Bolivia part of Tawantinsuyu, their vast Empire. The Inca forced their religion, customs, and Quechua language onto the Bolivian Indians. During the 1530s, Spain conquered the Inca and made Bolivia a Spanish colony naming it Upper Peru or Charcas. The Spanish colonists then began settling in Bolivia, establishing large estates they called haciendas. After silver was discovered in the mountains near Potosí in 1545, Spaniards poured into Bolivia in droves.

Bolivia’s silver became an essential source of wealth for Spain. The Spanish colonists frequently abused the Indians, forcing them to work on the haciendas and silver mines. Many Indians died of mistreatment or diseases brought by the Spaniards. From time to time, the Indians and mestizos rebelled against the Spanish, who quickly crushed most of the rebellions. Spain’s colonies in Latin America gradually became increasingly dissatisfied with Spanish rule. During the early 1800s, the Venezuelan general Simón Bolívar organised an army to fight for the independence of Spain’s South American colonies. In 1824, Bolívar sent one of his generals, Antonio José de Sucre, to free Bolivia. Sucre’s forces defeated the Spanish in 1825, and Bolivia declared its independence.

Bolivia has had a very stormy past since then, with numerous coups, rebellions and wars. Over the years, Bolivia lost more than half its territory. The losses resulted from war or treaties with Argentina, Brazil, Chile, Paraguay, and Peru. One of the worst losses followed Bolivia’s defeat in the War of the Pacific (1879-1883). In this war, Chile seized Bolivia’s nitrate-rich land along the Pacific Ocean. Bolivia has been without a coastline ever since. War broke out in 1932 between Bolivia and Paraguay over ownership of the Gran Chaco, a large lowland plain bordering the two countries. Bolivia was defeated in 1935, and it gave up most of the disputed land under a settlement arranged in 1938. Significant political disorder followed Bolivia’s defeat in the Chaco War. From 1936 to 1952, Bolivia had ten presidents as one political leader after the other seized government control. Six of the presidents were military officers supported by the army. In January 2006, Evo Morales, an Aymara Indian, was sworn in as Bolivia’s president: the first time since the Spanish conquest that the country had chosen a native, non-European or mestizo ruler. He served three terms but resigned in 2019 after controversy over his attempts to stay for a fourth term.