Photos from the United Arab Emirates 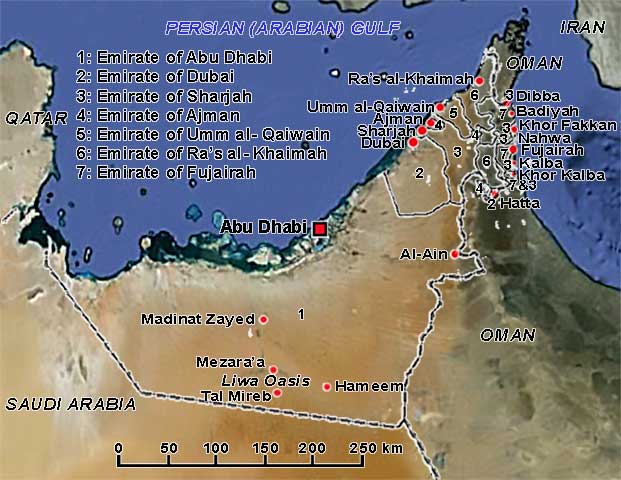 A short history of the United Arab Emirates

The United Arab Emirates is a federation of seven emirates in the Arabian Peninsula on the Persian (or Arabian) Gulf; it has borders with Saudi Arabia and Oman. The seven states or emirates are Abu Dhabi, Dubai, Sharjah, Ajman, Umm al-Qaiwain, Ra's al-Khaimah and Fujairah. Its capital and second largest city of the United Arab Emirates is Abu Dhabi; the president of the federation is the Emir of Abu Dhabi, presently Sheikh Khahlifa bin Zayed al-Nahyan and the Prime minister is the Emir of Dubai, Sheikh Mohammed bin Rashid al-Maktoum. The country has seen massive recent changes: towns that were little more than a collection of huts around the fort of the ruler transformed into gleaming cities with skyscrapers within one generation. There are about 6 million people, of which just under 20% are Emiratis: the majority of the population consist of migrants, many involved in the building boom.

There are traces of human habitation dating back to 5500 BCE. There was contact with the outside world, in particular trade relations with Persia; the camel was domesticated at the end of the second millennium BCE which facilitated foreign trade. There was also trade by sea, with places as far away as India and China. The region converted to Islam when envoys from the prophet Mohammed arrived here in the year 630. In the early 16th century the Portuguese arrived and controlled much of the region for 150 years; during the 16th century portions of it came under influence of the Ottoman Empire and also Omanis and Persians had influence. But the real power remained in the hands of the local sheikhs. Gradually the two main clans came to be the Bani Yas, a Bedouin tribe from Liwa Oasis in the interior and the Qawasim, the ruling dynasty of Sharjah and a seafaring clan based in Ra's Al-Khaimah.

The Qawasim were arch-rivals of the Al-Busaids, a clan based in Oman who also wanted to control this part of Arabia. In 1798, the British signed an agreement with the Al-Busaids that would assist to keep the French out of the area and strengthen British claims to India. However, this deal with the Al-Busaids made Britain part of the enemy as far as the Qawasim were concerned and from then on ships of the British East India Company were attacked and pillaged at every opportunity by Qawasim raiders. This stretch of coast therefore came to be known in Britain, India and beyond as the "Pirate Coast". The Royal Navy launched campaigns and raids against the Qawasim in the early 19th Century, but with little effect: the people knew the area and there were many hideouts along the coast and as far away as Persia.

But then in 1819 the British dispatched a large fleet from Bombay and within a year they had destroyed and captured every Qawasim ship that it had come across and occupied all the major forts in the area, including Ra's al-Khaimah. Then in 1820 the British imposed a General Treaty of Peace on nine Arab sheikhdoms in the area and installed a garrison. As there were often violent disputes between sheikhs and still occasional raids on ships, this was in 1835 upgraded to the Maritime Truce in which sheikhs agreed to stop all hostilities at sea. It was revised in 1839 to include the forceful banning of slavery and further revised and upgraded in 1853 to the "Treaty of Peace in Perpetuity" under which the British would arbitrate in any disputes between the Sheikhs of the area. This final truce gave the region its name for the next 120 years: Trucial Oman or the Trucial Coast.

During the nineteenth and early twentieth centuries, the pearling industry was very important in the region. The First World War had a severe impact on pearl fishery, and the economic depression and the Japanese invention of the cultured pearl all but destroyed it. Then the discovery of oil was to change everything. The first oil concession was from the poorest of the sheikhdoms, Abu Dhabi, to the British owned Iraq Petroleum Company in 1939. It needed Trucial Omani troops, commanded by British officers, to settle a border dispute with the Saudis before oil could be pumped. But a much larger oil field was discovered offshore and exports began in 1962. Abu Dhabi soon became the leading Sheikhdom in the Trucial States.

In 1960 the Trucial States Council was formed and in 1968 it was announced by the British they would completely withdraw from the Gulf region within three years. The British tried to unite the seven Trucial states with Bahrain and Qatar, two other British protectorates to the north west. But in negotiations the respective rulers could not agree on boundaries or political representation. Bahrain and Qatar opted out and became independent nations in 1971. The rulers of Abu Dhabi and Dubai then decided to form a union between their two emirates independently, prepare a constitution, then invite the rulers of the other five emirates to a meeting and offer them the opportunity to join. On 2 December 1971, at the Dubai Guesthouse Palace, four other emirates agreed to enter into a union called the United Arab Emirates. Ra's al-Khaimah joined soon after, on 11 February 1972.