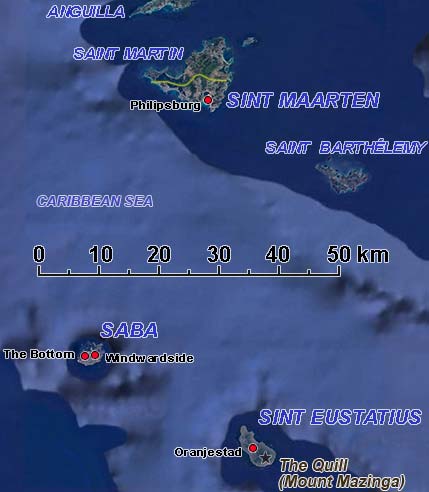 A short history of the Dutch Caribbean: the SSS Islands (Windward Islands)

The “Dutch Caribbean” refers to six islands in the Caribbean Sea, historically known as the Dutch West Indies and later as the Netherlands Antilles. These now make up the constituent autonomous countries of Aruba, Curaçao and Sint Maarten, and the special municipalities of Bonaire, Sint Eustatius and Saba. The latter three, sometimes referred to as the “BES islands” after the first letter of their names, are called the “Caribbean Netherlands”, although that term is sometimes used to refer to all six islands.

The Dutch presence in the Caribbean goes back to the 17th century; the Dutch West India Company was founded in 1621 to trade in the Caribbean. Colonisation started in 1631 when they constructed Fort Amsterdam on Sint Maarten. The Spanish visited the islands and declared them their territory, and the indigenous Amerindian populations, who had no immunity from diseases brought by Europeans, started to die out. The Spanish drove the Dutch out, but in 1648 they abandoned it, and both the Dutch and French landed on Sint Maarten/Saint Martin to colonise it. Rather than fight about it, they agreed to divide it and signed the Treaty of Concordia to formalise it the same year. The border changed a few times, and in 1795 when the Netherlands came under French rule, the whole island became French, but in 1818 it was divided again into a Dutch and French part, although the French got a larger slice of it, 53 km² against 34 km² for the Dutch.

The Dutch West India Company took possession of (uninhabited) Sint Eustatius in 1636. A commander of the Company settled on the island; in 1636, he governed Sint Maarten and Saba from there as well. Sint Eustatius became a significant trade point, surrounded by islands under French, English, Spanish, and Danish control, and became a duty-free port. In 1776 an American ship sailed into the harbour of Sint Eustatius and fired a thirteen-gun salute, for each state, in rebellion against the British. The Governor replied with an eleven-gun salute, making it the first international acknowledgement of American Independence.

In the 1640s, several Dutch families came from Sint Eustatius and settled on Saba, a small volcanic island, 26 kilometres to the west. Although Ciboney people probably inhabited the island as early as the 1100s BCE and around 800 CE settled by Arawak people from South America, it was uninhabited. The Dutch were evicted by Jamaican governors, who acted like pirates in 1664 but regained control again in 1816. In the interim, sugar, indigo and rum were produced using enslaved people imported from Africa.

The three islands, collectively known as “Bovenwindse Eilanden” (Windward Islands), became a single Dutch colony in 1818 as “Sint Eustatius and Dependencies”. It merged with the territories of “Curaçao and Dependencies” (Curaçao, Aruba and Bonaire) off the coast of Venezuela and Suriname. In 1954 the islands received autonomy, and the territory was renamed “Netherlands Antilles”. In 1986 Aruba, which had decided on a “Status Aparte”, seceded from the union. A series of referenda among the remaining islands led to the dissolution of the Netherlands Antilles on 10 October 2010.

To be continued with a map of the “ABC Islands” Aruba, Bonaire and Curaçao and a short history: