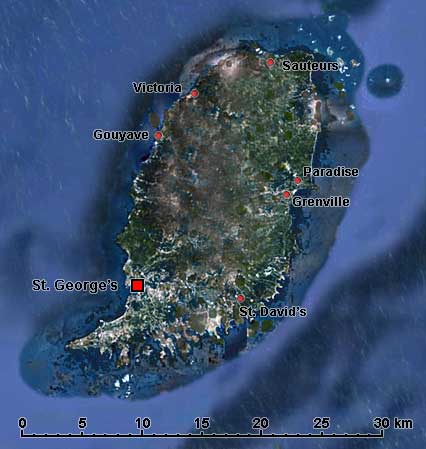 A short history of Grenada

Grenada is an independent island nation in the Windward Islands of the Caribbean, located about 150 kilometres north of the South American coast. In addition to the main island of Grenada, the country also includes the nearby smaller islands of Carriacou, Petit Martinique, and several islets of the Grenadine Islands. Grenada is a volcanic, mountainous island of 344 km² with little level land, numerous streams, springs, mountain lakes, and alluvial river valleys that provide fertile farming soil. The island is heavily wooded with teak and mahogany. Grenada’s climate is tropical, with an average annual temperature of 23°C and with rainfall ranging from 1,525 mm on the coast to 4,190 mm in the mountains.

About 85% of the population is of African descent; the remainder is chiefly mulatto or of East Indian descent. English is the official language, but many Grenadians speak a French patois. The majority of the population is Roman Catholic. It is popularly known as “The Spice Isle” because of an abundance of locally grown spices (especially nutmeg and mace). It has a vibrant culture of music, dance, and food. Tourism is Grenada’s main economic force. Conventional beach and water-sports tourism are focused mainly in the southwest region around the capital St. George’s, the airport and the coastal strip; however, ecotourism is growing in significance.

Christopher Columbus was the first European to sight Grenada in 1498. At the time, the indigenous Island Caribs (Kalinago) who lived there called it Camahogne. The English tried to settle here but failed and withdrew in 1609. A French expedition of 203 men, led by Jacques du Parquet, came from Martinique and founded a settlement on 17 March 1649; this soon brought them into conflict with the indigenous inhabitants who were no match for the invaders. Within five years, the French had brought the island entirely under their control, and the survivors either fled to neighbouring islands or retreated to remote parts of Grenada. Some survivors were pushed north to Le Morne des Sauteurs, where, rather than surrender, they jumped off the cliff to the jagged rocks below. Today the site of the Carib defeat is known as “Carib’s Leap” - Sauteurs is French for “jumpers”. The last distinct Carib communities disappeared during the eighteenth century.

The French named their new French colony La Grenade, and the economy was initially based on sugar cane and indigo. They established a capital known as Fort Royale (later St. George), situated on an excellent natural harbour. In 1762 the British captured Grenada during the Seven Years’ War, and the following year the island was formally ceded to Britain in the Treaty of Paris. The French, who had allied themselves with the Americans during the American War of Independence, briefly recaptured it in Grenada’s bloody land and naval Battle in July 1779. However, four years later, the island was restored to Britain again in the Treaty of Versailles.

In 1843 some nutmeg trees were introduced to the island, which began Grenada’s nutmeg industry that now supplies nearly forty per cent of the world’s annual crop. In 1877 Grenada was made a British Crown colony, ruled by a governor appointed by the Monarch. Over the years, constitutional and political reforms were made. From 1958 to 1962, Grenada was part of the Federation of the West Indies, a short-lived political union with other Caribbean islands, which were British colonies. It was intended to create a political unit that would eventually become independent from Britain as a single state, but the Federation failed. On 3 March 1967, Grenada was granted full autonomy over its internal affairs as an Associated State and achieved independence within the Commonwealth on 7 February 1974.

However, conflict developed between the government of Prime Minister Sir Eric Gairy and the opposition parties. The New Joint Endeavour for Welfare, Education, and Liberation, or New JEWEL Movement, was among those parties. In 1979, under the leadership of Maurice Bishop, it launched a paramilitary attack on the government, resulting in its overthrow. The constitution was suspended and Bishop’s “People’s Revolutionary Government” ruled subsequently by decree. But on 19 October 1983, Bishop was overthrown by the hard-line Communist Deputy Prime Minister Bernard Coard, backed by the army; he was put under house arrest, freed, captured again and shot. The strongly pro-communist government had Cuban construction workers building a 3,000 metres airstrip at Point Salines, 8 kilometres south of St. George’s, a development that worried the Americans. On 25 October that year, combined forces from the United States and the Regional Security System (RSS) based in Barbados invaded Grenada in an operation code-named “Operation Urgent Fury”.

Although the US was heavily criticised for this, it did bring normalcy and the pre-revolutionary constitution back to Grenada. Eighteen members of the “People’s Revolutionary Government” and army were arrested and tried, including the top political leadership of Grenada at the time of Maurice Bishop’s execution, as well as the entire military chain of command directly responsible for the operation that led to his and seven other executions. Democratic elections were held in 1984, and various parties have ruled the nation since then. On 7 September 2004, Grenada got a direct hit by Category 3 Hurricane Ivan, causing 90% of homes to be damaged or destroyed. The following year, Hurricane Emily struck the north with winds up to 150 kilometres per hour, causing millions of dollars worth of damage. But the airport at Point Salines that had brought on the American invasion was completed in 1984, replacing the inadequate Pearls airport on the northeast coast; it was renamed “Maurice Bishop International Airport” in 2009.