Photos from Friesland, the Netherlands 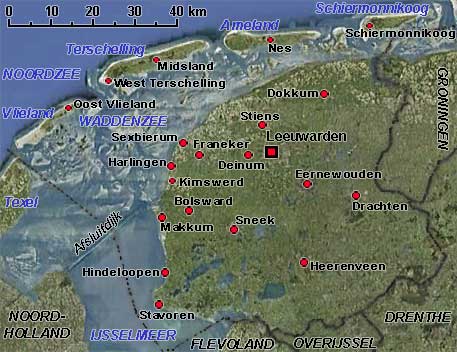 A short history of Friesland

Friesland, or as it is now officially known by its Frisian name of Fryslân, is a province in the north western Netherlands with an area of 3,430 km² and a population of approximately 650,000 people. As well as Dutch, many of them still speak the Frisian language, which is taught in schools and used on signed place names entering cities, towns and villages. Many street names in the smaller towns are in Frisian and there are radio and TV programs in the language. The IJsselmeer (formerly the Zuiderzee) laps the south-western and southern coast while the Waddenzee is off the north-western and northern coast; off this coast are the "Waddeneilanden", the west Frisian islands with the North Sea beyond. The province shares a border with the Groningen and Drenthe provinces on the east and Overijssel to the south. Leeuwarden, or Ljouwert in the Frisian language, is the Frisian capital and its largest city with a population of approximately 98,000 people; Harlingen (Harns) is the province's port.

Fryslân is a low-lying region and water is everywhere. In ancient times the inhabitants built artificial mounds, called terpen which had houses and sometimes entire villages built on top; these would become islands when the land flooded. Later, beginning in the Middle Ages, dikes were built to protect the lowlands from the rivers and sea. Canals were dug to drain the land with windmills pumping excess water into the rivers, thus creating the landscape, now considered "typically Dutch". Nowadays diesel and electric pumps are used. The network of drainage canals and the many lakes makes the province ideal for water sports, especially sailing. With its wide vistas and large farms, the province is predominantly agricultural. Raising livestock, particularly black and white Frisian cattle and dairy farming are vital to its economy.

Historically Fryslân was part of the region of Frisia, named after its Germanic inhabitants, the Frisians. The region was incorporated into the Franchise empire and its inhabitants ultimately became Christians in the 8th century, after the first missionary, Boniface of Ireland, had been killed after he had defiled a sacred tree. Medieval Frisia was divided into three regions: East Frisia, most of which ultimately became part of Germany; West Frisia, which was incorporated into the county of Holland; and Middle Frisia, roughly equivalent to the modern Dutch Friesland, which remained relatively independent until, after a civil war between two parties (called "Schieringers" and "Vetkopers") one of those parties asked for foreign help. From 1498 (under Count Albrecht of Saxonia, now part of Germany) until 1581 and under the Spanish King Philip II) the country was ruled by foreign sovereigns.

Yet the Frisians always retained their desire for freedom. In the Middle Ages they were a free country, although under the immediate authority of the German Emperor. Feudalism, prevalent elsewhere in the Netherlands, was unknown, and when the Dutch count William IV tried to bring this people of farmers, bargemen and fishermen into subjection, he and his army suffered a severe defeat in which he and many of his men were killed in 1345 near the village of Warns. The battle cry of the Frisians during the battle is purported to have been "Leaver dea as slaef" (Rather dead than being a slave). Resisting Spanish rule, Friesland's inhabitants joined the Union of Utrecht that established the Republic of the Seven United Provinces in 1579. The highly independent Frisians however appointed their own stadtholders until 1748 when William IV of Orange became the Dutch republic's only stadtholder, ending effective autonomy.